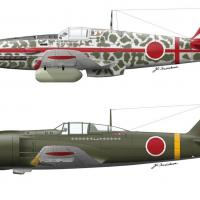 Hasegawa has re-issued their 1/48 Ki-61 and Ki-100 models as a ‘dual combo’ and it has included a 1/32 white metal figure of pilot ace Kobayashi. The pilot figure is broken down into body plus legs, with separate arms and head. Being a very bad figure painter, I decided to leave the figure alone. Notice the highly detailed face and the virtually non-existing mold line on it.

Upon opening the box you have two full 1/48 scale model with an estimated 125 parts between both models. There are actually 3 canopies, but only two will be used. You are also provided with a huge decal sheet with two options for the Ki-61 and one option for the Ki-100

Being a dual combo I decided to construct them in parallel and benefitting by painting the same subassemblies (using the same colors) at the same time.

Construction starts with the cockpit and they are virtually identical. The instrument panel has raised details and a decal is provided. Sidewall detail is reasonable for the scale and dry-brushes well. The canopy can only be mounted in the closed position for both airplanes, so the detail is appropriate. In my opinion, only a seatbelt is needed (I used an Eduard one, not included in the boxing). Notice that these airplanes only had lap-belts, no shoulder harness was installed.

Closing the fuselages presented no problems. There are a few different parts that need to be locked in place in addition to the cockpit. In one model is the air/oil filter and in the other kit is the radial engine.

Moving into the wings… there were a few surprises here. I followed the instructions and I found out that the wing root has a step between the wing itself and the fuselage for the Ki-61 and a gap for the Ki-100.

The Ki-61 wing was tackled by adding a small spacer, which actually improved the overall fit at the wing root but created a gap on the front of the wing. That is a good tradeoff as it is easier to fix by using some filler in the wing leading edge than on the wingroot surface. The Ki-100 wing was handled by simply using putty and sanding.

When I added the tail surfaces, in both airplanes, they drooped. It was easy to add a tiny bit of thin plastic sheet to the slot as to ensure there will be a nice and tight fit to the tail section.

At this point, I prepared the surface for painting. Only the wing root areas needed any real filling and sanding. The rest of the seams were taken care of by means of a polishing stick.

Taking advantage of the similar camouflage patterns (I choose to model two airplanes for the same squadron with just a few months between them) painting two models at once was a great time saver. I pre-shaded some selected panel lines, like moving surfaces and main wing spar. Then I painted the main colors using enamels and after several days of curing time, I applied two thin layers of Future for a nice gloss coat in preparation for the decals.

Regarding the decals, they are what you expect from Hasegawa: a tad on the thick side and able to resist some handling. They responded well to MicroSol/Set and conformed to the curvature of the fuselage without issues. The only problem I had was on the yellow wing markings, that in some spots it crackled and peeled away. In a way, it could be considered as weathering, but I actually choose to touch up with paint. I was surprised because this issue only happened with those decals. All the rest behaved well. You might want to consider painting the yellow wing leading edge markings in your model.

While the decals were setting, I tackled the landing gears. They are sturdy and easy to assemble., with positive pins that do not allow for the gears to wobble. The inner landing gear doors are a bit difficult to align. I would suggest taking your time when mounting them and use slow setting glue.

For final weathering, I applied an enamel wash to bring up all the great surface detail and I used some pastel chalk to simulate fading on the center of the wing panels and fuselage spine. I kept the airframes reasonable clean, as these airplanes were the mount of an ace and they were flying out of the vicinity of Tokyo. I assumed they will be kept in reasonable condition.

In summary: These models have several years since they were new but the molds hold well, with no flash anywhere and the fit is pretty good. Only the wing roots presented an issue. Having a dual combo allowed me to minimize painting time –by working with both models in parallel. I estimate I spent about 30 enjoyable hours to build both models, which is less than the time I would have taken to build two models.

I would recommend these two models to any modeler with an interest in Japanese aircraft that is comfortable dealing with minor filling issues in the wing roots.

I would like to thank Hobbico, Hasegawa USA and IPMS/USA for the review sample.