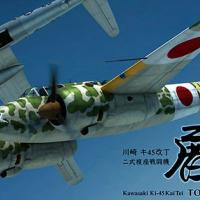 Zoukei-Mura’s latest release in 1/32 scale is the wonderful Ki-45 Toryu (Nick). This twin engine 2-seat, heavy fighter was used by the Japanese Army in WWII. In Part 2, I finished the cockpit and gunner positions and got the fuselage assembled.

Next off are the wings. Here, you will need to install all the internal workings for the wings. Will they show in the end, no but it is still too cool and too much fun to pass up. I installed the fuel tanks, linkages for the ailerons and then glued the bottom wing onto the structure. It fit perfectly. Don’t forget to drill out the holes on the wing bottoms before sealing up!

The landing gear are added next and I chose to go with SAC gear which are reviewed separately. Parts P-5 and P-26 are critical that you get installed and glued tightly. These are the main landing gear parts. They also have the mounting brackets for the engines at the top so see the instructions and detail drawings for the right way to do it. I did not add the tires or brake lines currently though. Next is closing the wing and here I saw something new- the wing roots were separate pieces. There is a clear notice to check these (so like Nike says, just do it!)

I added the wings and wing roots for both sides and the fit was good. I had to fuss with one of them but once done, the wings were attached and fit well. While these were drying, the remainder of the tail and horizontal stabs were built and installed with no issues.

The nacelles were built (pay attention to which version you are building, they are different) with no issues or gaps. Adding the engines was another issue. To add the engines, the four mounts slide in and grab holes on the bulkheads. One side was good and the other was “Dave’d”. In other words, it was slightly off. The engines seat well against the nacelles, so I glued it firmly to that with a little trimming and the plane was taking life.

Now comes, to me, the most difficult part of the build, the engine cowlings. Each cowling and flap consist of nine pieces. For me, the cowl flaps and the front cowling fit perfectly. When it was time to get the four cowling panels to align and close, I could have used an extra hand. In the end, the fit was less than perfect for me. If you are planning to leave the engines exposed, this is great- tack them in place and remove once painted. For closed cowling, it was a lot of adjusting and even then, I ended up sanding and filling to get a decent fit. NOTE- there is a gap at the top of the cowling, and this is correct- no need to wonder what’s wrong or fill it.

To finish of the fuselage, the nose was added next. Option B does not have the cannon so that step can be skipped but the cannon is beautiful. This fit well with minimal putty. Next, the greenhouse and canopies were built. Again, the options are different. A masking set is provided to help mask all that glass. The canopies fit extremely well. You have the option of open or closed also.

At this point, I sprayed primer on the plane with Alclad gray and fixed a few issues and it was time to paint. I tried something new and that was Vallejo paints. The overall color is labeled cement gray (71045) and I worked slowly and got an even coat on the entire plane. Any thinning was done with 91% alcohol. Then it was time to do all that mottling with Yellow Olive (71013). I used my Badger Sotar 2020 and dove in. After three round or gray then green then gray, etc., I was reasonably happy with the look. There are white bands on each wing, and these are supplied as decals, but I elected to paint them. A quick mask and these were done. After everything dried, several coats of Gloss Cote and it was time for the decals.

A note about the decals. They are superb. They conform easily but have a nice working time to locate. There is not a lot, and some are large, but all fit well and snuggled in perfectly. I followed this with another gloss coat to protect the decals.

I did a little general weathering with a few panel lines and pastels for exhausts. Not too much as I really liked the way the plane looked. A flat coat and it was on to the details. I added the wing light which has a great separate light inside the glass. The propellers were built, painted and then decaled and added to the plane. The wingtip lights were added along with the tail light. The fuel coolers were added under the wings. Lastly, the flaps were added in a down position for more interest. The masking was removed and the kit was finished.

I have been blessed to build and paint quite a few of Zoukei Mura’s kits and each one is just a blast to build and paint. This is a great addition to their line of kits and it is most highly recommended to fans or large scale planes, Japanese planes or just fun in general. I can’t wait for the HS-129 coming as well as all their great new reelases.

My sincere appreciation to everyone at Zoukei-Mura for selecting such a great subject, executing it perfectly and engineering it so well.