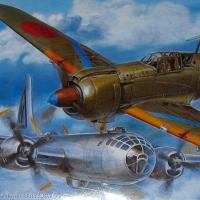 Derived from the Ki-61 Hein “Tony” the Ki-100 flew for the first time in February 1945 and without the need for the heavy coolant radiator and other fittings required for a liquid-cooled engine, was lighter than the Ki-61-II thus reducing the wing loading. This had an immediate positive effect on the flight characteristics, enhancing landing and takeoff qualities as well as imparting increased maneuverability, including a tighter turning circle. Pleased by the flight characteristics of the plane the model was ordered to be put in production and the first 271 of the airframes were remanufactured from Ki-61-II Kai and Ki-61-III airframes. Later 118 of the Ki-100 II with an ‘all around view’ canopy were produced. The Ki-100 was the Imperial Japanese Army’s last fighter and in the hands of a skilled pilot was more than a match for allied fighters.

Upon opening the box you are greeted by a 6 page instruction foldout (mostly in Japanese text), a bag containing a very nicely printed decal sheet, a bag with the fuselage halves and clear sprue and a bag with 5 sprue with all of the other parts. The plastic is crisply molded with no flash/sink marks, finely engraved detail, a few light pin marks and the clear parts are thin & very clear.

7 steps are needed to complete this kit starting with the cockpit tub. 12 parts make up the cockpit and for a 72nd kit it has a pretty busy pit. Once the cockpit tub is ready you can join the fuselage halves together and it’s at this time the exhaust shrouds, rear half of the engine and cowl guns are added. I decide to leave of the cowl guns until later for ease of painting.

Next up are the wings & horizontal stabilizers which is simple and easy, however, the inserts for the gun openings do not fit very well and some filler will be needed. After attaching the wing there is a piece (D-1)that attaches to the underside of the wing that does not fit well and the leaves a gap at the rear of the main wing (see pic) so you’ll need to fill this also.

The last two steps deal with landing gear, cowl ring, prop and canopy. The only problem I had here was the fit of the cowl ring (D-5). The gun troughs lined up nice but the ring itself was offset from the fuselage (see pic) and I’m not sure how or why. I left it like that and sanded it down on either side to make it look right…..sort of. The clear parts give you an option of posing the canopy open or closed and you are also supplied with clear parts for the lights to replace the molded on lights (The lights were too small for me AND my eyes!). Overall this was a very nice, good fitting kit with just a few minor problems and was a pleasure to build.

I used Tamiya J.A. Green (XF-13) and AS-12 (Bare Metal Silver) for this aircraft. You are given marking options for two aircraft. #1 is from the Akeno Flying School flown by Major Yohei Hinoki and #2 is from the 244 Sentai.

This is a very nice kit and I recommend it to anyone except beginners.