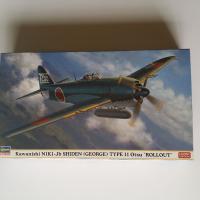 The Imperial Japanese Navy ordered the N1K1-Jb in 1942 as an interceptor.

Hasegawa has come out with a fine representation of this Imperial Japanese Navy Kawanishi N1K1-Jb, with the Allied code name of “George”. The kit decals represent three factory-fresh “George” aircraft.

Building the kit is straightforward, with little flash on the sprues and pieces. Assembly begins with the cockpit. The instrument panel uses a decal for the instrument panel over a raised detail panel. A word of caution here: ensure that the cockpit is securely attached to the side of the fuselage, as mine broke loose during final assembly. I was lucky enough to be able to re-glue the cockpit on my model.

Painting is relatively simple on this model. There are two main colors: silver and Imperial Japanese Green. I substituted aluminum for the silver color, as I felt that the Japanese aircraft would only have had the green painted on. There is also a yellow section on each wing (which I forgot to paint, and only discovered my error after I had applied decals).

Since I wanted to portray an aircraft that just rolled out of the factory, I left off the provided bombs and auxiliary fuel tank. This made the aircraft look quite sleek.

Many thanks go out to Hasegawa for providing this kit for review.