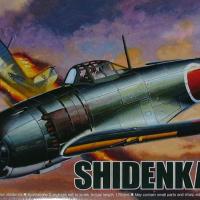 The N1K was originally developed as a floatplane for forward land bases but by the time it entered service Japan was on the defensive. Kawanishi engineers had proposed in 1941 that the N1K could be a formidable land-based fighter too and a land-based version N1K1-j (J indicated land based fighter modification of the original floatplane version) was produced as a private venture by the company and first flew in December 1942. Due to it being a mid-wing design (because of the floats & large prop) a new design was begun just 4 days after the first test flight. The major defects being addressed were the wing and long landing gear. The wings were moved to a low position, which permitted the use of shorter, conventional undercarriage, the fuselage was lengthened and the tail redesigned. The first flight was on January 1944 and production of the N1K2-J "Shiden-Kai" (Kai standing for Modified) started in April of that year. The N1K3-J Shiden KAI 1, Model 31 was a Prototype with the engine moved ahead a few inches, only 2 were built.

Upon opening the box you will find a 6 page instruction foldout, and 4 bags containing a decal sheet, a very nicely molded clear sprue and 6 various sized sprue of grey plastic. The plastic is molded well with fine recessed panel lines & no noticeable sink marks or pin marks, however, the wing guns and pitot tube are molded to the upper wing halves (Parts 1 & 2) and are very thin so care must be taken when handling these parts (It took me three tries until I finally broke the pitot tube!). The decals are also nicely printed and in register.

13 steps are needed to complete this kit starting with the cockpit tub. Steps 1-5 deal with this and for a 72nd kit it has a pretty detailed pit (16 pieces make up the cockpit tub!) and there a few small pieces so use care when handling. One thing I wish they would have added is a decal for the control panel and seat harness. Next up is the 7 piece engine which is finely detailed (you will need to add a wire harness though if you wish) but you do not see much of it with the prop and spinner blocking the view.

Steps 7 & 8 deal with joining the fuselage halves, engine, cowl & propeller but I decided to hold off on adding the prop till later. Step 9 is divided into 4 sections and is for the landing gear, external tank and pilot figure.

Step 10 is the surgery required for lower half of the wing. Yep, you need to do some cutting! The N1K3-J had its engine moved forward a few inches and Aoshima was very kind to mold different parts for the different types instead of just boxing the same kit and calling it something else as they have boxed the N1K1, 2 and 3.(Those of us who like late mode F4U Corsairs understand this all too well!) Having said that, or rather typed that, the surgery is tricky due to the location of the cut...flush with the leading edge so a good fine razor saw is very nice tool to have handy and if you cut wrong you’re going to need filler! I didn’t so everything came out just fine but take your time making that cut and all will be good. Step 11 is the wing & stabilizer assembly and everything fit just nicely.

Steps 12 & 13 are the addition of the landing gear, external tank and canopy and you do have an option of posing the canopy open or closed (Thank you Aoshima!) Overall this kit was really fun to build and pretty easy even with some minor surgery needed.

I used Tamiya J.N. Green (XF-11) and Bare-Metal Silver (AS-12) on this aircraft. You are given marking options for two aircraft and since only two were built that’s it. (There is always the ‘what if’ option!) The decals went on just fine but I did have a problem with the yellow leading edge decal. Not only was it too narrow but it was also way too long so I ended up painting these.

A great little kit that was a little challenging and a lot of fun to build. I recommend this kit to anyone except a beginner.