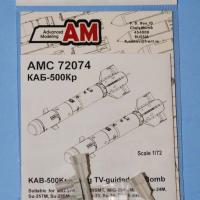 Advanced Modeling, based in Chelyabinsk Russia, has jumped in to help 1/72 (and 1/48 as well as 1/32) model builders of modern Russian aircraft that include the Su-24M, Su-25TM, Su-25SM, Su-30MKI, Su-30MKK, Su-32, MiG-27K, and MiG-29SMT. This new release provides two KAB-500Kr 500kg TV guided bombs consisting of four grey resin parts and two clear resin parts. It also includes a photoetched fret consisting of two pieces for the rear end of the bombs and a well done waterslide decal sheet with black stencil markings.

Notable is the re-sealable packaging that Advanced Modeling uses that makes the parts easy to review and then stuff back into the package securely. Painting instructions are included with the instruction sheet, in this case calling out FS 26473 grey. The resin parts are well cast with no air-bubbles or any casting errors that I could spot on any of the resin parts.

You will want to be careful separating the rear resin fins from the casting block as their small size makes them easy to break. I would recommend using a fine tooth razor saw to remove the parts from their pour stubs. Assembling the resin parts is fairly easy, just take care to make sure the nose seats properly to the main missile body. The photoetch part looks great but will need a nice flat surface to seat properly.

Be sure to use your favorite CA (super glue) or epoxy, as the normal plastic glues or solvents will not react with the resin material. I assembled everything with the exception of the clear resin parts to begin painting. I used Tamiya Light Ghost Grey (AS-26) feeling is was close to the FS 26473 grey. If you check the internet, you can find the KAB-500Kr in a variety of greys. I painted the mounting inset of the clear resin lens black. Speaking of the decals, they are tiny, but they do appear to be accurate. I used both Solvaset and Mr. Mark Softer and had no problems with either in getting the decals to settle down well. After a flat coat, you’re done. I still ended up with a couple silvering, but that’s my fault.

I was very impressed with the detail in this 1/72nd scale kit. I was happily surprised that although the fins are very thin, they somehow survived my handling without any breakage. The great decals just sealed the deal. My thanks to Victory Models and IPMS/USA for the chance to review this resin set.