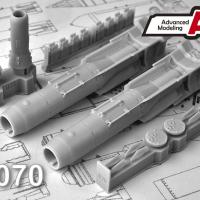 The KAB-1500Kr series are Electro-Optical guided bombs. The seeker employs a gimbaled daylight television imaging sensor under a wide angle glass dome. This has enhanced sensors for guiding the bomb and can come in several different explosive materials inside. It is a large weapon for taking out difficult hardened items. Advanced Modeling has produced a 1/72nd scale version of this weapon and it is a beauty!

The set comes with enough parts to make two individual bombs. All the parts are perfectly cast firm gray resin. Each bomb is comprised of eleven gray parts and a clear cast seeker head. There is also a comprehensive decal sheet. No seams or bubbles are on any parts. Assembly starts by preparing the resin parts and removing the casting blocks. This is simple except for the rear of the main body. There are separate moving fin parts. To make these as realistic as possible, you need to do some careful trimming. Add the rear plate. The front section is separate to allow different versions to be made and is keyed into the back which is superb engineering. The front fins are attached next and lie flat as they open when launched. I didn’t add the clear hear until after painting. I did use a very little bit of filler which was my fault for getting a little aggressive sanding parts.

I primed the part with Alclad gray and then painted the entire bomb with FS26473 gray which looks pretty good with the pictures Advanced Modeling included with the review items. The decals have great opacity and come off quickly and settle nicely onto the parts well. Each bomb has fifteen separate decals. A wash and then flat coat later and I was ready to add the seeker head. I painted the cavity black and the seeker head fit perfectly. It is also as glossy and clear as any piece of resin I have seen. True craftsmanship on the pieces!

Highly recommended. These are very well done and would really enhance a heavy load on a 1/72nd Mig or Sukhoi aircraft.

My thanks to Mikhail and Advanced Modeling for the opportunity to reviewthis excellent set and IPMS/USA for the chance to review it.