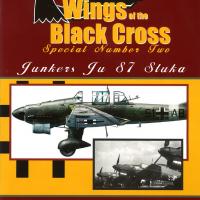 Mark Proulx has enthusiastically studied World War II history for decades. During that time, his primary focus has been on the air battles over Europe. He has written a number of books for the Wings of the Black Cross series. Earlier on, that interest drove him to an airline career, where he now works as a training captain for one of North America’s larger regional airlines. In addition, his research has also been directed toward a number of EagleCals produced by Eagle Editions. Mark currently lives in Alberta, Canada where he is married with one daughter.

Steve Deisley is a graphic artist that has recently joined Eagle Editions and provides the color profiles and color scrap details.

Eagle’s second book in their Wings of the Black Cross Special addresses the Junkers Ju 87 Stuka and follows on their first in the series on the Messerschmitt Bf 110. These specials are an outgrowth of Eagle’s standard Wings of the Black Cross series that allow the author to focus on a specific aircraft. The 48 glossy pages utilizes photographs from Mark Proulx’ private collection along with a few other select sources, most of which have never seen print before. The front cover features a clip of a Ju 87 R-2 from Stab I./St.G 3 (the full artwork is on page 29) and a black and white photograph featuring a lineup of Ju 87 R-2s assigned to I./St.G 3 prior to the invasion of Greece in April 1942. The rear cover features a color photograph of one of three Stukas that surrendered to the Allies at Furth, Germany, on May 8, 1945. I counted 63 black and white photographs, 3 color photographs, ten color side portfolios, and nine scrap drawings.

Mark Proulx provides a nice introduction to the Junkers Stuka and covers the evolution of its basic camouflage schemes. Tables provide common Stuka codes and other identifying characteristics. The well-captioned photographs basically run in sequence starting with the Ju 87 A Stuka and ending with the Ju 87 G Stuka. The color profiles are tied to the black and white photographs, and along with some of the color scrap illustrations, are very helpful.

I found several photos of the Ju 87D-4 quite interesting. The D-4 was a conversion of the D-3 designed to operate from the German aircraft carrier Graf Zeppelin. Carrying a shiny LT F5b aerial torpedo, they look quite impressive.

Mark Proulx provides interesting captions to the photographs that are accompanied by gorgeous illustrations from Steve Deisley. If you own one the previous releases in the Wings of the Black Cross series, you know what you are getting. If you have any interest in the Ju 87 Stuka, from either a historical or a modeling perspective, you will be quite pleased.

My thanks to Eagle Editions, Ltd. and IPMS/USA for the chance to review this great book.

Back cover of publication

Sample page from book
Previous Next