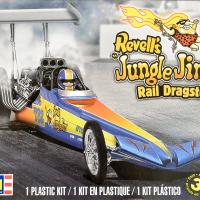 The Revell 1/25 scale “Jungle Jim” Rail Dragster is a re-release of a series of dragsters produced in the mid-1970s. This particular kit represents a car driven by “Jungle” Jim Liberman. If forum comments are correct, this is not a representation of any specific car or race, but rather a generic representation of one of his cars. If you want to build something specific, a bit of research will likely be necessary.

The kit comes in Revell’s typical 9” x 7” model box, where you’ll find four sprues of white plastic, one chrome sprue, one black sprue with the rear tires, and a vinyl-type sprue for the front tires.

The largest sprue contains the dragster’s body, seat, and wings. There are some heavy ejection pin marks, but fortunately they are on sides that are not visible. I didn’t notice any sinking on the visible sides, so the parts shouldn’t require much cleanup.

The two sprues containing the dragster’s rails are another story. There is quite a bit of flash that will need to be cleared off before the parts can be used. Once cleaned up, the casting is thin and should look in scale. The final sprue contains a driver figure that looks fairly generic and probably won’t be used by most modelers.

The chrome sprue is typical of Revell, with fairly heavy chrome that dulls the detail of some of the parts. Serious modelers will likely want to strip it off and use one of the available metallic paints.

One disappointing aspect of the kit is a lack of “rubber” tires for the dragster’s rear wheels. Instead, there is a plastic sprue that has two-piece tires that will need to be glued together. The tires will probably need to be painted, as the black plastic is too glossy to represent tire black.

The instructions are Revell’s usual step-by-step guide, nothing remarkable, and they are generally very clear and easy to follow.

My thanks to Revell for providing the kit and to IPMS/USA for the chance to review it.

Box Side Images of a Finished Model