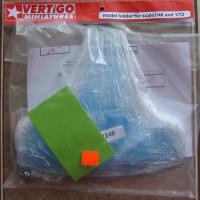 While this jig is sold by Vertigo-Miniatures on the web, the review item was supplied by Unique Model Miniatures, so a big shout-out to Jon of UMM!

This Vertigo-Miniatures jig requires assembly, and that is just a bit ironic since it will be of considerable help to the hobbyist during the assembly process of one’s latest modeling project. Assembly is straight-forward requiring a little super glue and about 10 minutes of one’s time.

The instructions provide a parts list and a couple of diagrams which identify parts and illustrate how they are attached. Just follow the instructions and it’s a very simple process.

There are a few points about assembly that one should note.

There appear to be three (3) parts identified as #2 but, in fact, there are only two (2) part #2s. A third part, very similar to #2, is identified as part #2. That is “part#2(period)". Part 2(period) is easily distinguished by the depression at the mid-point of the upper edge. Both part # 2s have an arrow engraved on them. Not that it makes much difference, but attach those parts so that the arrow points toward the “neck” of the base rather than rear end.

The three part #3’s have some guide marks engraved on them which will help you to align the vertical braces, which are parts # 4.

Although not shown in the images, the upper surfaces of the brackets which come into contact with the model under construction are covered with strips of felt. There is a felt pad included in the product packaging, which can be sliced to width and then attached to the bracket upper surfaces, parts #2 and 2(period). Rubber bands can also be wrapped around parts #2 and 2(period) to provide a cushion, should one not wish to use the felt strips.

Finally, to give you some sense of size and proportion, a 1/48th P-47 by Revell is posed on the jig.

The jig is stable, easy to adjust (note the vertical brackets can be adjusted for width and the brackets, those parts 2 and 2(period)), can be tilted right or left to any position required.

This jig is best suited to 1/72nd and 1/48th scale aircraft. Another jig is available for larger scales, 1/32 and 1/24. I’ve used my jig with armor and autos, as well as aircraft, so it is more versatile than just a focus on aircraft subjects.

This product is highly recommended for its strength, versatility, parts that can be positioned as needed, and ease of use.

Thanks to UMM and Jon for supplying this item to IPMS for review.