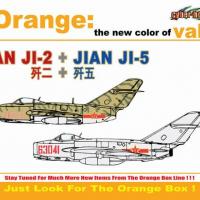 On November 1, 1950, a new jet fighter appeared in the skies over Korea to counter the B-29 bombing raids which, up until then, had gone unopposed. This was the MiG-15’s debut and the beginning of a long and distinguished career for the entire MiG jet-powered series. Although the MiG was effectively countered by the F-86 Sabre, it wasn’t because it was lacking in performance. In fact, it had a better rate of climb, service ceiling, and heavier armament. The difference came down to the training and attitude of the UN forces. A number of Soviet “volunteers” managed to make ace in their MiG-15s. The MiG-15 had some issues with maneuvering at high speed that limited its Mach number. Then entered the MiG-17 which wrapped a redesigned airframe around the same engine. With a redesigned wing platform, the MiG-17 was more than capable of taking on the best America had to offer. This was proven in the skies over Vietnam where numerous Vietnamese pilots attained ace status against more sophisticated aircraft.

The MiG-15 and -17 series were manufactured in a number of foreign countries, including China. Wanting to establish a modern fighter manufacturing program, China solicited the Russians in 1950 to start a production line for the MiG-15. Setting up the process took longer than expected, so it was decided to transition right into building the MiG-17 series. As a result, no fully complete MiG-15s came off the Chinese production lines. The subjects of this review are the Jian (fighter) Ji-2 and Ji-5, which are the Chinese MiG-15 and -17.

Classified it a “super value pack”, Dragon has packed two reissued kits in one box. From what I can see, they did that without changing a thing, meaning there’s nothing new here. You get the same parts and decals as were in the individual kits when first issued. At first glance, things look promising. The recessed panel lines are nicely done and generally in the right place. The rivets are represented by small pin holes all over the airframe. However, the clear parts are a weak spot for both kits. The MiG-15 windscreen has sprue attachments right in the clear section that cannot be fixed. The MiG-17 canopy has molded-in details and clarity issues that makes seeing through it difficult. Decals are provided for two different Ji-2/MiG-15s and four Ji-5/MiG-17s, including the infamous Vietnamese ace Col. Toon. The instructions are a single fold-out sheet with painting directions in color. The color chart includes codes for three different brands, including Model Master.

Since there’s not a lot of parts, these kits go together quickly and my impressions for each are as follows:

The cockpits for both are basic, but fine for the scale. Decals for the instrument panels are provided. There are no seat belts, but I was planning on closed canopies anyway. Part fit was average, in that the round fuselage halves weren’t round at the top or bottom. As if that wasn’t enough, the attachment points for the wings did not match the profile of the wings themselves. Since that’s not an easy fix, I flushed the tops and worried about fairing in the bottoms later. The intake ring also didn’t match for the front of the fuselage. I saved myself the trouble of breaking off the pitot tubes on both models by cutting the parts off and drilling holes for later mounting. Needless to say, there was some putty and sanding work to be done.

Part fit was much better on this one. The fuselage is split behind the wing to allow for different versions, but it creates a problem because the sections don’t match up when mated together. Put as much weight as you can in the nose; I didn’t add enough in either plane and had to resort to some magic to make them sit right in the pictures. The lower nose section is a separate part and also didn’t quite line up. More filing, filling, sanding, and scribing to make things right.

Since these are the Chinese versions of the MiG-15/17, I decided to use marking that the instructions said were flown by Chinese pilots. Both are in natural metal finishes. The Ji-2 is red 08, flown by a “Chinese Volunteer” in Korea. The Ji-5 is a home defense aircraft of the Chinese Peoples Liberation Army Air Force. After several rounds of putty and primer I undercoated both airframes with Alclad gloss black and let it dry a few days. Both models then received a finish coat of dull aluminum. At this point, the Ji-5 was ready for decals. The Ji-2 needed a red nose. I applied the red 08 decal and used it as a guide to hand paint the red nose on.

The decals for these kits are fairly good. They come off the backing paper with little fuss and are workable on the model. I found they didn’t want to settle into panel lines, so I tried some Solvaset. Be careful! Solvaset does what it says and softens the decal very well. I made the mistake of touching one I had just treated and a portion of it stuck to my finger. I touched it up with an artist’s pen. The saving grace of the decal process is there are not many to apply.

The cannons on both are separate parts that, in retrospect, I should have added before final painting. Why? Because on the Ji-2 the sprue attachments are on the finish side of the parts and on the Ji-5 the contour of the part didn’t match the fuselage. The landing gear for both are decent and the gear wells have some nice detail. The attachment points for the gear actuators on the Ji-2 are a bit vague. The landing gear doors for both models are cast as one piece and have to be cut apart if the gear is positioned down. There are lines for cutting guides, and that process went smoothly. The drop tanks, pitot tubes, and antennas round out the details. Of note on the Ji-2, the instructions have the pitot probes going under one side when the actual aircraft has one in a different location under each wing.

Good points are you get two models at a reasonable price, detail consistent with what’s out there these days, and a lot of markings to choose from. The bad points are, first and foremost, the canopies lack of clarity and poor casting points really tainted my build experience. Even though the airframe part fit was not great, I was still enjoying the process until the canopy issues came up. I ended up opening the Ji-2 canopy because I couldn’t get it to fit tight against the windscreen. If you take this offering on, I would strongly recommend replacement canopies. Overall, I would give these kits a 7 out of 10. It was a bit more work than I was expecting.

I would like to thank Cyber Hobby and Dragon Models USA for providing the sample, and IPMS-USA for letting me build you a couple of cool little MiGs.