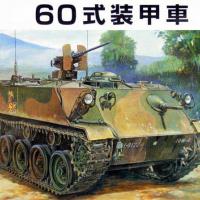 The Japan Ground Self Defense Force (JGSDF) is the main branch of the Japan Self-Defense Forces responsible for land-based military operations. It is the de facto army of Japan.

Development of the Type 60 armored personnel carrier (APC) began in 1957. Mitsubishi Heavy Industries and Komatsu Ltd. were tasked by the Ministry of Defense to develop prototypes for an APC that would see use exclusively in Japan by the JGSDF and could keep up with their main battle tanks. From 1958-60, several prototypes were evaluated. In 1960, the Type 60 was selected and production began. There was no amphibious capability, nor was the vehicle protected from biological, chemical, or nuclear contaminants. It was capable of a top speed of 28 mph and weighed 11.8 tons. The armor was welded rolled plate steel, good enough to protect against most rifle calibers and shrapnel.

The troop compartment can carry up to six soldiers sitting on bench seats, three on each side, facing each other. A gun rack allows the embarked infantry to stow their weapons during road marches. The engine compartment is located on the mid-left portion of the hull. The driver’s station is located on the right side front. The vehicle is armed with a Browning M2 .50 caliber (12.7mm) machine gun mounted on top of the vehicle and a .30 caliber (7.62mm) (first the M1919 then later the Type 74 7.62mm) machine gun mounted in a ball swivel in the glacis.

Models of the Type 60 appeared in several Godzilla films.

Five sprues consisting of 170 parts (1 of clear parts for vision blocks and headlights); one decal sheet of markings for six vehicles; one length of string for the tow cable; one assembly instruction booklet.

The hull is comprised of a bottom, two sides, two front pieces, and the rear. There is no interior, but the walls of the engine compartment are represented. Because I intended to have all hatches closed, I didn’t use part B23, the engine compartment walls. Many parts have a thin, almost unnoticeable, line of flash at the edges. I gently scraped and sanded the flash away to achieve a good parts fit.

Step 4 indicates you’re to add three clear parts (part D2) for the driver’s engine block prior to attaching the top of the vehicle to the hull, but this is not necessary as you can insert the vision blocks from the top. This should make painting easier. Just be sure to keep part A37 to the side for attachment later.

The road wheels, 10 on each side, are nicely detailed three-piece assemblies – inner, outer, and rim. The rim attaches to the outer road wheel. Fine Molds doesn’t use polyethylene caps like Tamiya and Trumpeter, but the drive sprockets and road wheels fit snugly on their mounting pegs. The idler wheels are four-piece assemblies.

The support arms include keyhole-type mounting tabs to ensure they’re attached properly. This was helpful during the track assembly attaching process.

The track assemblies are link and length. They are attached in step 16, but I waited until most painting and assembly were completed before attaching them. While Fine Molds’ attachment instructions and references are good, I still had difficulty in correctly placing the individual track blocks (part C15) and the largest lengths (C41). The bad fit in the photos is a result of my ineptitude, not Fine Molds’ parts and instructions! I think the best option would have been to attach the track assemblies before painting so I could correct fit issues without fear of damaging already painted parts.

None of the hatches were difficult to attach. There are lots of little parts like hatch handles, but they fit well and are appreciated because they don’t require the modeler to remove the unpopular block shapes used by other kit makers to represent handles. All hatches can be posed open if you wish to build a detailed interior and/or include crew members and embarked infantry. One hatch (bow gunner) has a periscope.

The headlight mounts, horn, and headlight guards are delicate but fit well. On the driver’s side is mounted a side-view mirror, but the assembly instructions indicate it’s optional.

The tow cable is a length of white string; these can be prone to minor fraying when handled, so use care. I cut it to the indicated length in step 19, then dipped it in brown, then silver grey Vallejo Washes both to stiffen it and help prevent minor fraying.

The fenders were disappointing (rear, B39 & B40; front, B24 & B25). Mounting tabs had to be cut away to get a flush fit. Once that was done, however, the fenders looked nice on the model.

The antennas are a nice addition. They are molded as one piece each. Use good references if you want to add details like cables. The antennas have clear mounting locations on top of the vehicle.

For the Type 60’s main armament, Fine Molds included a passable Browning M2 .50 caliber heavy machine gun and its vehicle mount. The muzzle needs to be drilled out. The cradle on the left-hand side is for an ammo box (not included). If you wish to include ready rounds and an ammo box, you’ll have to look to the aftermarket. The butterfly trigger is delicate and had some seams to remove. The machine gun includes a separate charging handle, a traverse & elevation (T&E) mechanism, and a feed tray cover. The hatches for this gunner’s station can be posed open.

The bow-mounted .30 caliber consists of a barrel inserted from the inside of the vehicle in piece B19, the glacis. It’s assembled in step 1. The receiver is not included with the kit. The muzzle must be drilled out.

Like many modern AFVs, the Type 60 carries tools used to perform track assembly maintenance, to dig the vehicle out if bogged down, or to use nearby vegetation and materials for hasty camouflage. The on vehicle equipment includes: shovel, mattock head and handle, ax, tank bar, track rejoiners, spare track blocks (x3), a track pin, and a sledge hammer. They are painted olive drab per the painting instructions.

I left off the clear parts (headlights, vision blocks for driver’s and commander’s hatches), tow cable, running gear, antennas, and track assemblies. For the base coat, I used Tamiya XF-73. Rather than depict a squeaky clean Type 60, I wanted to show it a little dirty, being used on training exercises. Of the kit’s six marking options, I chose scheme 3; the Japanese flag on the hull sides just looked dramatic!

For the rubber portion of the road wheels, return rollers, and rubber pads on the track assemblies, I used Vallejo Model Color (VMC) Black Grey (70862). This color was also used to basecoat the .50 caliber machine gun and the bow gun. The spare track blocks (vehicle top and left fender), track assemblies, and track rejoiners were basecoated with Vallejo Game Color (VGC) Charred Brown (72045). The on vehicle equipment and water cans on the rear were painted VMC Brown Violet (70887). The straps holding the water cans were painted VMC Deck Tan (70986). The vision blocks were painted VGC Blue ink (72088). The exhaust is not a dark rusty color as some would expect; numerous photos show it to be dull aluminum in appearance. I used VMC Oily Steel (70865) as a base coat. The brake lights on the back of the APC were painted with VGC Bloody Red (72010) with a touch of VMC Black (70950) added. The inside of the headlights were painted Citadel Silver.

To accent the lines around hatches and access panels, I used Citadel Badab Black wash. It flows well and isn’t too pigmented, resulting in a scaled appearance of the dark panel lines. It was also used as a wash for the vehicle’s weapons and the .50 cal’s T&E.

The decals are in good register and easy to apply. They aren’t too thick, nor did they have excessive clear bordering around them. Applying them over a glossy surface helps reduce problems of visible edging and silvering. I used Mr. Hobby’s Mr. Mark Softer after applying the decals.

Thank you to Dragon Models USA for providing the kit for review, to Fine Molds for an interesting kit, and to IPMS USA for the opportunity to review this kit.