Jet Fighters of the U. S. Navy and Marine Corps, Part 2: Mach 1 and Beyond - Digital Version 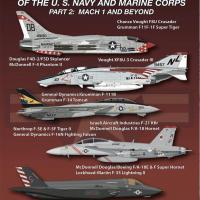 This is a review of the digital version of the Details & Scale’s Jet Fighters of the U. S. Navy and Marine Corps book which has been released concurrently with the hard copy that is reviewed here. The digital version of the Jet Fighters book is available in both Apple’s iBook and Amazon’s Kindle formats. The digital edition has a few more pages and photographs than the hard copy. I have a MacBook Pro computer, so I decided to try the iBook on my computer. Most people use the iBook app on an iPad, but it works just as well on a MacBook laptop. iBooks can be viewed on Apple iPhones also, although the image is much smaller and difficult to view without zooming in on the page.

A link on Detail & Scale’s website goes to the Apple iBook store where the book can be purchased. The volume downloads and is ready to read shortly in iBooks on my MacBook Pro (or iPad, or phone, or Kindle device).

An excellent guide to using iBooks is on the Apple Website. The Apple IOS signature taps, finger swipes, and finger pinch motions are easy to learn and are much the same as many touch tablet systems. It’s easy to pick up iBook navigation and you’ll quickly be moving around the text and photos.

Moving the cursor to the top of the screen brings up a menu with options to bring up the table of contents, toggle page thumbnails at the bottom of the screen, bring up a search window, or add bookmarks. The search function is particularly helpful finding a word or phrase anywhere in the book. Text can be selected by holding down the Shift key and dragging through the text. After selecting text, Right Click on the selection to bring up options for highlighting, copying, adding to Notes, and emailing the selection.

Pressing Shift-Command-5 brings up the standard Apple capture dialog box with capture, save, and email options. This function is great saving screen captures for future modeling reference. I used the capture function to copy the pages for this review.

I found Jet Fighters to be easy to read and navigate on my Mac. While clumsier than an iPad, a PowerBook is certainly a viable option for iBooks. If you have multiple devices the book can be viewed on all.

Detail & Scale provides the following description of the book:

“Jet Fighters of the U. S. Navy and Marine Corps is a two-book series that describes the entire history of American Naval jet fighters, from the very beginning when many thought that the onset of military jets would mean the end of naval carrier-based aviation, to today when the fifth-generation stealth jet F-35B/C Lightning II has begun its service with both the Navy and Marine Corps. Also covered by the books is the history of how American aircraft carriers evolved from the ESSEX class ships that won World War II with propeller-driven aircraft to the mighty supercarriers of today.

In the first book, Jet Fighters of the U. S. Navy and Marine Corps, Part 1: The First Ten Years, author Bert Kinzey described the first- and second-generation jet fighters that came on the scene at the end of or shortly after World War II. These jet fighters made their first flights between 1945 and 1954, and the book covers fifteen aircraft arranged according to the chronological order of the date of their first flight.

This concluding volume, Jet Fighters of the U. S. Navy and Marine Corps, Part 2: Mach 1 and Beyond, resumes where Part 1 left off and continues to the present day. The evolution of the United States Navy’s aircraft carriers is again picked up and covers continued modifications to the ESSEX and MIDWAY class carriers and to the initial super carriers of the FORRESTAL CLASS. The follow-on super carriers of the KITTY HAWK, NIMITZ, and FORD classes are discussed to highlight the continued evolution required to handle the ever increasingly sophisticated jet aircraft that have achieved operational status.

Together, Jet Fighters of the U. S. Navy and Marine Corps, Part 1 and Part 2, cover every jet fighter that has been designed, built, and at least reached the flying prototype stage since the FH-1 Phantom first took to the air in 1945. The remarkable history of these aircraft, the problems faced, the solutions developed, and the successes achieved provide incredibly interesting reading for the aviation enthusiast”.

The next section provides detailed descriptions of the jet fighters in 13 chapters that vary from 3 to 23 pages in length. Each chapter includes text describing development, capabilities, and characteristics of each of the aircraft. Color photographs and profiles clearly illustrate each of the aircraft. Aircraft chapters include:

I found the digital version of Jet Fighters Vol 2 to be easy to use and a convenient way to browse through the book. Jumping around to different sections using the pull-down table of contents makes navigation quicker than flipping through pages. The photos are gorgeous on the Mac screen and easy to zoom in. Being able to search for key words or terms is very handy. If you feel comfortable with an iPad or computer, the D&S digital books are a great way to save resources awhile still having the books available.

The content of Jet Fighters is very thorough and easy to read with lots of great information. These publications are great resources for modelers.