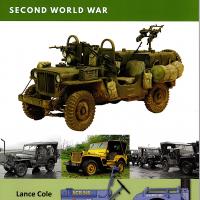 This is one of three books in Pen & Swords Land Craft series. The other books include the M2/M3 Half-Track and Bren Gun Carrier. The Land Craft books are good resources for modelers as they provide background on the design of vehicles, detailed descriptions, photos of variants, and include descriptions of completed models and available kits

The contents of The Jeep book are:

This section describes the story of the jeep during its early years of 1940-45 as it played a significant role in the 2nd World War and went on to become an icon in the four wheel drive movement. The Jeep became a wartime hero and went on to inspire a brand, sparking today’s off-road and 4-wheel drive enthusiasts. The Jeep became the first four-wheel drive multipurpose vehicle and B&W photos are used to show some early variants. This book focuses on the wartime Jeep with a concise description for the enthusiast and modelers.

The development history of the jeep is discussed in this chapter from its roots in an American adoption of a 1930’s British Austin design that had good ground clearance, simple construction, and ease of use. Other influences include a 1927 engine design used in the Willys Overland Whippet car. The book describes the development of 4-wheel drive trucks beginning in the 1st World War and continuing through the 1930s. Predecessors of the off-road Jeep included modified Model T and Model A Fords, the Howie-Wiley Belly Flopper in 1937, Marmon Herrington 4 x 4 light truck based on a Ford model LD1 in 1937, a French Citroen, and a Sydney Allard from Great Britain. Originally branded by the American Austin Company, the American Bantam Company developed the general purpose vehicle that became the true wartime Jeep. In 1940 Bantam was awarded the contract for the first prototype for the Army’s 4-Wheel drive off road vehicle. Willys also developed a prototype called the Quad. The US government passed the Bantam plans on to Willys and Ford. After legal challenges, the US awarded Bantam the initial order and then issued Willys development and manufacturing contracts. Ford worked to develop its own prototype called the Pygmy. The Willys and Ford prototypes would be merged into a the Willys Military Type A. The Willys-built Jeep became the model for the off-road 4 x 4 type, and the Ford-built jeep would dominate production.

The Jeep in Detail

Construction details of the Jeep are discussed in this section, as well as detail differences between the different manufacturer’s versions. Black & white photos illustrate many of the Jeep details

This section provides four-view color profiles of the following markings:

In Service and In Action

Black and white photos are used to illustrate different Jeep configurations in various operations during WWII.

The book is a nice reference for Jeep modelers as it includes good descriptions of the vehicles, many illustrative photographs, and inspiration through the color profiles and completed models. The text on the topics covered is fairly brief, but thorough, and there are lots of clear black-and-white photographs and color profiles. This is a great reference for modelers of Jeep vehicles.

Thanks to Pen & Sword for providing the review sample of the book to the IPMS review program.