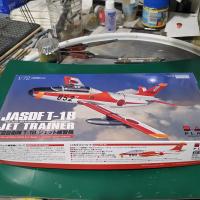 The Fuji Heavy Industries T-1 series of aircraft was the first aircraft entirely designed and built in Japan following World War II. The T-1B has a Japanese-designed and built engine, which is the only change from its predecessor, the T-1A. Externally, there is no difference between the two models. The T-1A first flew on January 19th, 1958. A total of 66 aircraft (of both types) were produced, and the type was retired in March of 2006.

Platz’s T-1B kit faithfully reproduces Fuji’s T-1B and is molded in light grey plastic. There was no flash on my sample, and the panel lines are crisp and recessed into the plastic. One downfall of the kit is the instructions, which are in Japanese save for the aircraft information and step titles. However, you can easily follow them with the clear assembly drawings.

I started my kit with the fuselage/cockpit assemblies. One note here is to add some weight to the nose (I suggest between the intake trunks or immediately behind the cockpit) to ensure that the model will sit properly on its gear. While the model will sit properly on the landing gear, mine just barely sits on its gear. The cockpit panels and instrument panels are represented by decals.

The kit parts fit together well, with only a minimum of sanding and putty required, mostly on the fuselage. The nose intake piece was the only problem area, the problem being a slight misalignment on piece A3 (I may have inadvertently created this) that required some slight sanding to fix.

A plus for this kit is that the pitot probe on the right wing is replaced by a turned metal probe. I left my sample’s pitot probe off until all painting and decaling was complete.

Pay particular attention when you assemble the drop tanks in Step 7. I accidentally glued one of the tanks backwards on its pylon! A note about Step 8, External Tanks and Air Brake Attachment. What the instructions do not make clear (in English) is that you can have either the drop tanks or an extension of the wing plate. The instructions show both parts going to each slot on the wings. I left off the fuel vent, part C12, until after painting and decaling.

Painting was easy, as the entire aircraft is gloss white, and the colorful paint scheme is reproduced on the decal sheet. Decals really make this model come alive, and they are intricate and multi-layered. You have a choice of four aircraft, all in the same paint scheme. I chose aircraft 25-5850 as the one I wanted to represent. A nice touch is the inclusion of colored stripes to cut to size and fill any gaps left in the decals on the model. A suggestion is to paint the red and fluorescent orange areas on the tails and wings, as this will mask the decal seams. It took me approximately 8 hours, spread over three days, to apply all the decals.

Overall, this builds into a nice replica of this important Japanese aircraft.

Special thanks to Platz Hobby for the review sample.