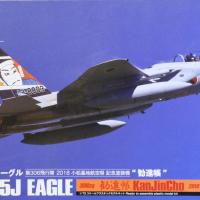 The Mitsubishi F-15J/DJ Eagle is a twin-engine, all-weather air superiority fighter based on the McDonnell Douglas F-15 Eagle in use by the Japan Air Self-Defense Force (JASDF). The F-15J was produced under license by Mitsubishi Heavy Industries. The subsequent F-15DJ and F-15J Kai variants were also produced. Japan is the largest customer of the F-15 Eagle outside the United States.[In addition to combat, F-15DJ roles include training. The F-15J Kai is a modernized version of the F-15J.

The kit is produced by PLATZ, a well-known model company. The box art work in outstanding! The scene depicts an F-15J inflight with after burners on. The kit consists of approximately 200 parts and comes on 7 grey sprues. Included is a very nice decal sheet printed by Cartograf. All the parts are nicely molded with very nice detail and no flash. All panel lines are recessed and all the sprues have narrow gates. The 5 page instruction sheet shows the suggested assembly through 9 steps starting with the cockpit, and progressing through to the final assembly and installation of the under wing armaments.

The kit fits together very nicely and there were no areas that required filler. I started with the suggested first step with the cockpit. I had no problems until I reached Step 4, there a raised ejector pin marks on the interior of the jet engine air intakes. I had left them thinking they would not be visible but later they became evident. At Step 5 where you build the air intakes it is a little confusing. You can build the air intakes in the up or neutral position or pointed downwards in the landing position. The instructions are written in Japanese and English but I think there is more of an explanation in Japanese. The part that points the air intakes downwards is C21. The rest of the build proceed with no further problems. I’m very pleased with the results.

Included is a 2 page Painting and Marking Instructions. The painting colors referenced are Testors and Mr. Color. I chose to use corresponding Tamiya paint colors. The two tone paint scheme is very striking.

An extensive decal sheet is included. This boxing included the KanJinCho 2018 Air Show in Komatsu Special Markings. The markings are pretty cool! The decals are thin and are printed within registry. The decals lay down with no silvering.

Overall the kit is a joy to build and builds into a striking F-15J. I really like building PLATZ kits due to their fit and detail.

My thanks to PLATZ and IPMS USA for the opportunity to build this great kit. I look forward to building more PLATZ kits in the future.