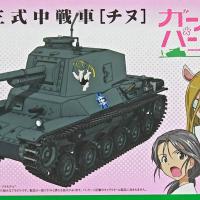 I must begin this review by giving a big thank-you to one of my fellow IPMS Wright Field Scale Modelers, Robert Cobb, who at our January 2013 modeling retreat got me hooked on Japanese Anime. “Thanks, Bob!” Specifically, Bob introduced me to the “Girls und Panzer” series. (And yes, it has snowballed from there.) “Girls und Panzer” follows several characters from the Ōarai Girls High School in Japan. The Ōarai girls participate in the sport of sensha-dō (tankery) along with several other all-girls high school teams located worldwide. The schools participate in non-lethal tank battles fought in World War 2-era tanks. The Ōarai Girls team runs a very eclectic mix of tanks, including the “Chi-Nu” tank operated by the school’s computer nerd team (The Anteater Team).

The series has become extremely popular with multiple products being released related to this show. Included among the products are many model kits representative of the tanks used in the show. The Fine Molds Type 3 “Chi-Nu” is included in the list. The kit has been out for several years now, but this edition of the model includes a revised decal and instruction sheet which includes the painting and decal details associated with two versions of the “Chi-nu” used in “Girls und Panzer”. Overall, the parts in this kit are well molded with just a couple small parts having a tiny bit of flash. The only exception I found in the kit were with the road wheels. The detail on the wheels are very nice, but the two sprues with the road wheels had a bit of more mold seam to sand out than found on the remainder of the parts. It almost appeared as if the upper and lower molds were not perfectly aligned. This issue simply caused me a bit more time sanding the wheels. No harm, no foul.

Assembly is very straightforward and follows a logical build progression. With that said, I want to address some of my thoughts with this kit. The fit for the Chi-nu kit is spot-on and the only filler I used in this build was the result of my error and not the fault of the kit. If I had taken just a bit more time with the sponsons, this build would have been filler-free. If your plans are to display the hatches open, you should know the kit does not include any interior parts. Another positive point with this kit, other than the excellent fit, was the fact very few ejector pins marks were found in locations requiring the builder to fill. I’d like to see more of that with other kits! The kit’s suspension parts are keyed to fit the hull based on a level road surface, but with a little effort you could possibly articulate a few of them. Depending on which wheels you articulate, the related spring parts would need to be kitbashed into the appropriate position.

Fine Molds lists the color guide in both Mr. Color and Tamiya paint lines. Basically, you have the choice of painting the Chi-nu as either a gray or deep green, depending on what representation you prefer. I’m personally beginning to use more and more Tamiya paints, so I went that route. I had no problems painting the tank with my trusty H&S airbrush, and soon the model was finished and ready to be wrapped up. I glosscoated the four armor panels that would receive the decals representing the Ōarai Girls School, as well as the Anteater Team’s turret marking. The decals seemed to both lie down well, and reacted well to my Micro-Sol/Set treatment. My only complaint with the decals was the quality of the printing. There are halftone dots visible in all the decals. This may be more common that I’m aware of, but these are a bit more obvious. I did have a little silvering issue with the Anteater decals, but in all honesty, I may have rushed things a bit at this stage of the build. As far as the kit tracks, they are a one-piece “rubber band” design. They don’t appear to be like the typical vinyl found in some other kits, but these were more like a rubbery material. To test them out, I shot a bit of my Tamiya primer on the track sprue and let it dry to make sure the primer would not react with the material. After a week, everything looked good, so I primed the tracks and sprayed them with my Tamiya acrylic paint. I was pleased with the results.

I was very excited for this opportunity to build my first Fine Molds model kit. I would definitely recommend this kit for someone new to armor since the fit and finish is well done without having hundreds of parts to deal with. The “Chi-nu” will make a fine addition to any armor collection, and if you’re a fan of the “Girls und Panzer” show (as I am), you will want the “Chi-nu” on your shelf with the other tanks from the show. This kit, as well as the other kits in the series, can be found on the Dragon Models USA website. I would like to pass along my thanks to Dragon models USA, Fine Molds, and IPMS USA for the opportunity to build this fine kit.