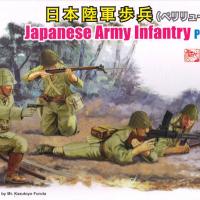 Within the past year, Dragon Models has issued a brilliantly executed model of the Imperial Japanese Army’s Type 95 Light Tank “Ha-Go,” arguably the most important Japanese tank of Pacific War (review at http://web.ipmsusa3.org/content/type-95-light-tank-ha-go-early-producti…). Unfortunately, figures to go with such a vehicle have been in short supply over the years, with the various manufactures much preferring to produce German or even Italian figures from among the Axis forces of WW2, with Japanese subjects a distant third. Of late, though, this has changed with MiniArt, Fine Molds, and Master Box all releasing sets of WW2 Japanese figures in the past year. Now, Dragon joins them with a set of their own.

The figure set consists of four individual figures on one sprue in grey plastic. Each figure is in six main parts – two legs, two arms, upper torso, and head. One figure is in a kneeling position, firing his rifle. Two others are prone on their bellies, one firing a machine gun, the other holding a rifle. The fourth is an officer in a crouching position with one knee on the ground, firing his pistol. Each figure comes with a flat head, thus requiring that they wear the helmets that come in the set. In addition to the helmets with separate cloth neck protectors, each soldier has a standard kit such as a kit bag, water container, ammo pouches, etc. The officer comes with a pistol for one hand, a sword for the other.

The molding quality of the figures is average. I rate it thus because every part on the sprue has a significant mold release line down each side of the part. A fair amount of very careful scraping and sanding work will be required on each part to get the most out of the figures. However, once this is done, I am sure the figures will paint up nicely.

Given the paucity of Japanese Pacific Theater figures on the market today, this set from Dragon Models is very welcome and will compliment the firm’s excellent Type 95 “Ha-Go” tank very well.

My thanks to Dragon Models USA for providing the review sample and to IPMS USA for allowing me the chance to review this set.