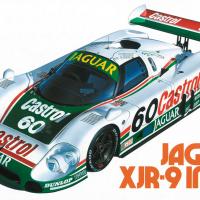 From Hasegawa's website: Designed specifically for taking the racing world by storm, the XJR-9 was the eighties Jaguar that finally cracked the iron grip Porsche had on the 24 Hours of Le Mans and brought Jaguar its first Le Mans win since 1957. In America, the type also brought home the win at the 24 Hours of Daytona and took third in the overall Constructor's Championship. This limited edition kit features markings for three IMSA-GTP class Daytona Sunbank 24 hours racers: Car No. 60 (the winner), Car No. 61, and Car No. 66 (third place).

Hasegawa originally released this kit in 1989, shortly after Jaguar had won at Daytona the previous year. This limited edition version is the same kit with new box art. (Limited Edition usually means that this will be the last release of these molds.) What is under that new box art are sixty seven parts molded in white plastic, clear parts for the windscreen and headlamp covers, four rubber tires as well as decals for all three cars (#60, #61, #66) that entered the 24 Hours of Daytona in 1988.

There are some extra parts included with this release but those are clearly marked on the instruction sheet. One note, those extra bits will allow you to build a car that was entered at Le Mans. Those cars had a different style spoiler wing, different exhaust configuration, and different style rear-view mirror. You will need to scrounge around for decals for those cars as the livery was somewhat different (different sponsor and color scheme). Although if you can wait, Hasegawa is re-releasing the Le Mans version of this kit pretty soon with the appropriate markings.

The model goes together easily. There are some fit issues around the rear wheel cooling vents (parts #E24/#E26) but nothing insurmountable. Another problem area, for me, was with the windscreen. The side windows are separate parts and should be placed in position before attaching the main windscreen. There is a slight wrap to the upper portion of the body that may prevent a smooth, fault free fit of the clear bits. In Hasegawa's defense the headlamp covers fit like a dream. I may have actually spent more time drilling out the cooling holes on the disc brakes then I did assembling the kit. Probably not, but assembly is well within the abilities of most, if not all, modelers. Having said that, a novice builder may need some help with applying the decals.

Painting this beasty wasn't much of a chore either. The cockpit, engine area, and under side are all black. I used a rattle can for the shell of the car body as it's an off white. There are some rear suspension bits (four parts) but they are mostly for show as they are partially hidden behind the exhausts and the mounting bracket for the rear spoiler wing.

The rear wheel skirts are molded to the body shell. My feeling is that these cars look cooler and meaner without those skirts. There was some consternation, at the time, about those wheel skirts but after winning the 24 Hours of Daytona those complaints kind of died off. It wouldn't really be much of a chore to remove them and expose the rear wheels. But as this is a curbside model, there isn't an engine, drive train, or suspension to show off, a detail that might be missed should you decide to remove them.

The instrument panel/dash is one piece with a detailed steering wheel and decals for the instruments. The driver seat has the five-point safety harness molded to it with the gear shift lever being the only other detail part in the cockpit. The real cars had a rather spartan interior so you’re not missing out on much. These cars only had one job and that was to go fast...for a long time. Well...maybe two jobs.

Applying the decals was a bit time consuming task, but they go on easily and snuggle down into all the nooks and crannies just fine. Just go slow and take your time, the decals are thin and subject to tearing. Do pay attention to the box art for proper placement. One slight problem area, for me, was with decals (#20, #21) for the rear spoiler wing. Both of those decals wrap around the wing but decal #20 is a two-piece affair with the slotted one going on the bottom. That aspect isn't that well defined in the instructions. (I would suggest applying the decals for the spoiler before adding the mounting struts.)

Hasegawa also provides some press-on badges/logos, either Dunlop or Denluc, for the tires. I wasn't able to get mine to adhere, so I gave up and went with a more natural, unadorned look.

As I don't have the patience for a shiny finish, my 'Jag' is depicted as if at the end of the twenty-four hour race, covered in road tar and track gook. (This technique also allows for my less than stellar application of the color coat on the car body.) I do know a guy who has an excellent article on Six Steps To A Shiny Finish (http://www.austinsms.org/Painting-Secrets-For-Car-Models.php) if you’d care to have a go at that.

This kit builds up nicely right out of the box and looks just like another really fast car. If your obsessive-compulsive disorder does kick in, this kit could be a detailers dream. With all the extra bits (driver seat, seat belts, wheels, instruments, etc.) available from the aftermarket crowd this would be a stunning model.

My thanks to Hasegawa and IPMS/USA for the review copy.