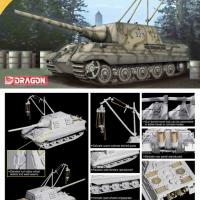 The actual box art image does not do the kit justice - it is a great little diorama accessory. There are 186 plastic parts, 54 of which are extra. There are also 25 photo-etched parts and two vinyl tracks. I’ve built 6 or 8 of these little Dragon 1/72nd armored kits and have accumulated a massive spare parts box.

I’ve built one of these Jagdpanzer VI’s before, though without the crane, and basic construction is very simple. The suspension (Picture 1) goes together in about 15 minutes, and another 10 can be spent on adding the parts for the rear armor plate. I added everything to it prior to painting. I found the photo-etched shields difficult to bend in this scale, and not a good fit. They are optional depending upon the vehicle you wish to depict, and although I got them to go on, I left them off the final product.

The engine is represented by a tray which goes into the chassis and remains visible thought the removable engine access hatch. Picture 2 shows the engine installed with a second one from another kit I have built alongside for comparison. Picture 3 shows the assembled hull top. There is no zimmerit represented, although other versions of this kit without the crane do have the hull top pre-textured. Again, I chose to add all the accessories before painting. The long 12.8 cm barrel is plastic, and attachment points must be dealt with.

There are two decal choices, both for schwere panzer Abteilungen in Germany in 1945, one an ambush scheme and one a simple three tone strip pattern. I painted a modified three tone pattern using Model Master acrylics, German Wehrmacht colors, and had no trouble with the decals, which settled down easily on a patch of Kleer. These vehicles require very few decals, and I used only two numbers for mine. There were no crosses on my version, although some are provided on the sheet. A spritz of matte and then on with the tracks, which I painted Tamiya Hull Red acrylic. Then I attached the hull top and bottom, and then it was on to the crane, which is really the crowning glory of the kit.

And then I hit “the wall.” One of my vertical supports was short cast; I had to manufacture a suitable top to hold the eyehooks for the photo-etched chains. Not a big problem, but I couldn’t replicate the shape very well. See if you can tell which one is remanufactured.

The photo-etched chains are beautiful, and after fortifying myself for two weekends with a variety of potent potables, I got down to it. The plastic blocks and hooks are surprisingly easy to manipulate into position, and the top, horizontal portion of the photo-etched chain went on easily. I eased up on the drinking and went ahead with the two vertical portions.

That’s where I encountered a problem. The ancillary pulley and chain are designed to have the chain thread through the pulley. The trouble is, the photo-etched chain is too wide and will not fit. It does not want to turn inside out very well, but I managed to get it at last, after three tries. It does look a bit crumpled – I put it down to battle damage.

The main, looped thread of vertical chain does not thread at the top of the support, but the loose straight portion should thread through the pulley-and-eye at the bottom. If you decide to do this, please do it before installing the upper end. That was too much battle damage for me and I simply super-glued the pulley-and-eye to the end of the chain for pictures 4 and 5.

Most of the tools are molded on, and that works at this scale. I have learned to go along and underscore the edges with a very sharp knife, which emphasizes the relief more. This does not show up well in the pictures, and I could have used a few more passes - next time for sure.

I weathered this vehicle very little, as they saw very little service. A filter and some pin washes, very understated, were all I did.

This is a straightforward kit with a real twist in the crane, and was challenging and fun at the same time. These little Dragon kits are a blast and I look forward to more of them.

My thanks to Dragon for an enjoyable experience!