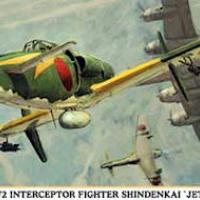 Hasegawa has reissued an old friend in the form of a 1/48th scale J7W2 (Jet Version) Interceptor Fighter. The J7W2 was a natural follow-on to the prop-driven J7W1 kit which was released quite some time ago. While the J7W1 prototypes actually flew short test flights for a total time of just under an hour, the J7W2 never got off the drawing board. The Info-Paragraph on the Hasegawa website states that, “It took its first flight on August 3rd, 1945”, but that comment refers to the J7W1 prop-driven aircraft. The only J7W1 left in existence is in the Smithsonian collection, and the J7W2 was never actualized. Within the kit instructions, the issue of whether the jet version ever flew is correctly put forward with a statement that reads, “The IJN, encouraged by the previous success of its propeller-driven Shinden prototype, had plans to build a jet-powered Shinden Kai, but historians have been able to ascertain exactly how far along this project was at war’s end.”

The fact that the J7W2 is a hypothetical design may put off some modelers, but they are missing out on a well-done “classic” kit. Hasegawa’s J7W1 kit has been around since dirt was young, or about 30 years, and is still considered to be a good kit. And this derivative of the J7W1, the J7W2 kit, provides 3 resin parts to convert it into the “jet” version.

Let’s look at the Pro’s and Con’s of this kit:

This kit is recommended due to its ease of assembly, quality of molding, thorough instruction sheet, decals of good quality, and “coverage” of a unique subject. Thanks to Hobbico-Hasegawa for providing this item for review by IPMS.