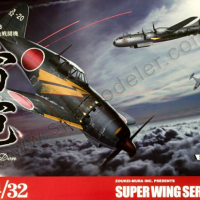 This is the second part of my review of the Zoukie-Mura 1/32 J2M3 ‘Jack”. See Part 1 for images of the sprues and a general overview of what is included with the kit.

The engine… and what an engine it is. There are forty-three parts broken over ten steps. Assembly begins by gluing the cylinder banks together. I was too aggressive in removing the sprue attachment points here so I had to fill some seams along the baffle plates. The cylinders were painted in Alclad aluminum and the crankcase hand-painted in gloss black. A dark wash was applied over the aluminum to make the details pop out. A lot of parts build off of the cylinders, so it is critical that everything aligns. Fortunately the instructions provide excellent detail as to where everything fits.

The instructions call for installing the exhaust pipes early in the build. I suggest waiting until after the cowl flaps are installed, since the pipes have to align with slots in the flaps. I had the choice of open or closed cowl flaps. I wanted to expose as much of the engine as I could, so I went with the open flaps. The flap actuators have to be trimmed if going with closed flaps. The pins on these have to be wedged into place, but the plastic is ‘springy’ enough to make this step simple. The last step for the engine is the installation of the motor mount. In itself, it’s a wonder of injection molding. Everything from the firewall forward hangs on this mount (just like the real aircraft), which glues on at four small attachment points. It’s critical to get rid of any paint that may inhibit a strong glue joint here. Along the way, I dry-brushed light gray onto the black-painted parts, which brought out much of the detail that would have otherwise been hard to discern. Once completed, the engine and its components are very impressive. An extraordinary amount of detail is included.

The cockpit… and what a cockpit it is. There are fifty-five parts to this section, broken over eleven steps. The J2M3 fuselage is very wide at the cockpit and the kit captures it very well. The cockpit is fairly traditional in how the parts fit, but there is a lot of extra detail under the cockpit floor that will never be seen. Most of the interior was painted in Mr. Color Mitsubishi Cockpit Green. Everything was given a coat of future and a wash and dry-brush to bring out the details. I had the option of building the seat with or without seat belts. I chose to build the seat without belts.

The cockpit sidewalls have a significant amount of sprue stubs on them so a lot of time was spent cleaning them up. It’s worth the effort since the sidewalls are very visible under an open canopy. The instrument panel comes in both gray plastic and clear, and you can choose to either paint the instrument details or apply a decal. I chose to go the easy way with the decal.

The front of the sidewalls attach to the firewall, which also includes the fuselage fuel tank. The tank has good surface detail, but since it comprises of two halves details were lost when the seam was cleaned. Fortunately, it’s virtually impossible to see once the fuselage is closed up. Also included in this step is the radio compartment at the rear of the cockpit. The radio face is slide-molded and has great details, as does the roll-over bar. The instructions indicate to install the antennae at this point, but I left it out until later to avoid damage. The manual also indicated to glue the engine to the firewall at this point, but I also left this until later.

The main wings. The wings in the kit (thirty-five parts) are quite a bit different than most WW2 monoplane models. There is a spar across both wings that adds quite a bit of rigidity, and both the top and bottom wings are a single piece, instead of the top wings comprising of separate left and right sides. This gives the fuselage a very solid surface to mount against. Wheel wells are comprised of three pieces each, and each wing fuel tank is included.

Each gun bay is represented with wing ribbing, ammo boxes, and two 20mm cannons. I had trouble closing the wings and had to trim the ribs quite a bit to get everything shut. I don’t believe I installed the ribs incorrectly, but they were too tall to allow the wings to join. Two of the cannon barrels project out of the wing, and despite my best efforts, I broke one off during later stages of the build. If I were to build this kit again, I would cut the barrels off and glue them back in place during final assembly.

Once I had the ribs trimmed, the wing halves went together nicely, with just a minimal seam to clean. I also painted the yellow identification band on the leading edges at this time, since I suspected that I would have a much easier time masking them off now then after the fuselage was added to the wings.

The fuselage (26 parts). The fuselage order of assembly is also different than any model I’ve build in the past. The cockpit is glued into the right fuselage, then this assembly is glued to the upper wing. Next the left fuselage half is added, then finally the lower fuselage. The design of the wing gives a nice, solid place for the right fuselage and cockpit to mate with. Once everything was together, there were only small seems along the top of the fuselage and along the bottom where the lower section mates. Lastly, wing filets practically snap into place, yielding a very clean upper wing to fuselage join. I was expecting a fight at this stage, but the way everything in this step goes together so cleanly speaks volumes about the engineering of the kit. At this point of the build, I painted the upper surfaces of the model dark green and the undersides light gray, after masking off the cockpit and firewall. I painted the wheel wells aluminum after the underside was painted.

The main landing gear (24 parts). The landing gear comprise of separate tires and hubs, lending themselves to easy painting. Also included are plastic brake lines. Everything goes together smoothly, but when it came to adding the struts to the wings, I was let scratching my head. The gear go into the wing by inserting at an angle, then twisting them into the proper position. There is nothing solid for them to attach to, leaving them very sloppy and loose. I eventually ended up using CA to lock them in place. It wasn’t as difficult as it sounds, but this is clearly an area of the kit that is lacking in engineering. When compared to the outstanding engineering in the rest of the kit, it’s even more perplexing. The gears doors went on at this point without a hitch.

Cowling and propeller (28 parts). The cowling on the kit can be installed or left off to show the wonderful detail north of the firewall. It would have been nice if ZM made the cowling removable ( a la Tamiya’s new Mustang and Spitfire). The cowlings fit very well, again speaking to the quality of the kit. There are so many pieces that go into the front of the kit that I am struck by how well everything lined up. The propeller and cooling fan also goes together in this step, complete with counterweights and internal ribbing for the spinner. I finally got a chance to use my bottle of Mr. Color’s ubiquitous #131 Propeller Color at this point. I coat of Future over the prop ensured that the decals went on without a glitch.

Final outfitting (36 parts). This final step includes attaching the canopy, the landing flaps, gun sight, formation lights, and bullet-proof glass. I chose to go with the canopy where the frame is separate from the glass. That makes painting the canopy frames a breeze. And it looks as good as the traditional style of canopy. I also added the parts I had left off earlier (antennae, attaching the engine mount to the firewall). The formation lights required a bit of sanding to get into place, likely because of paint build-up. The landing flaps can be installed up or down, and they fit very positively into rails on the underside of the wing. There is no structure detail to see if the flaps are posed down. I do not know if that’s an omission by ZM or if the real aircraft lacked detail there as well.

There are two choices of markings included. They are the same options included with the Hasegawa kit. The Concept Notes contains a build of a captured bare metal J2M3 in US markings; perhaps some aftermarket folks will come to the rescue and offer this scheme. The decals are sufficiently opaque to cover up the dark green with yellow, but not so thick as to not conform to the surface detail. There is little in the way of stenciling, but that may be historically accurate.

I like to build high-end kits. Over the last few years I’ve focused on the new 1/32 Tamiya kits like their Mustang and their Spitfire and the superb Wingnut Wings kits, so I believe I have a good understanding of the state-of-the-art in plastic modeling. With this in mind, I can honestly say this is the best engineered model I’ve ever built, with the best instruction manual I’ve ever seen. This is a complicated kit with outstanding detail; there are many places things could go wrong, but it simply fits together…. . very well. It’s not perfect (the landing gear comes to mind) but even with its few flaws, this is simply an outstanding model kit.

Thanks to Zoukei-Mura and IPMS for the opportunity to review this exceptional model kit.