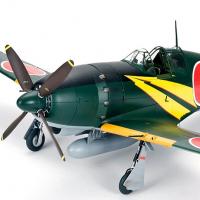 The fifth Super Wing Series kit from Zoukei-Mura (ZM) is the Mitsubishi J2M3 Raiden (Allied code name ‘Jack’). I have the Hasegawa kit of the same aircraft in my stash, but when ZM kit arrived, I was very surprised at the size of the box. The kit box is substantially larger than the Hasegawa box, and it is full of plastic. Lots and lots of plastic. The lift-off box top is beautifully rendered in glossy artwork featuring the J2M3 of Lt. JG Yoshihiro Aoki, with views of the actual model on the sides.

Inside there are nine individually wrapped sprues of light gray plastic and two sprues of clear, with a total of 247 parts. There is a single decal sheet, a small sheet of paint masks, and the most comprehensive instruction manual I’ve ever seen (more on that in a minute). Also included with the review was the ZM Concept Notes.

This is an all plastic kit (no photo-etch or resin included) although ZM does sell some upgrade parts. The plastic itself is exquisite. Not only is there no flash in sight, the mold parting lines are as minimal as I have ever seen. The detail is very crisp and the clear parts are crystal clear. ZM used slide molding to add even more detail; gun barrels and exhaust pipes have hollow openings. This is especially beneficial with the exhausts. Not only are they prominently exposed on this aircraft, they are not round in cross-section, so drilling them out would have been difficult. Ejection pin marks are mostly in places where they will not be seen, with one notable exception. Wing panels are removable over the guns. The inside of these panels have ejection pin marks. These are fairly easy to fill, but it’s still surprising they are there in the first place.

ZM also added a nice innovation with the wind screen and canopy. The traditional style parts are included, which require masking the glass and painting the frames. Masks are included for this. Going beyond this, ZM included another full set of glass, with the frames molded separately, so the glass is added after the frames are painted.

As mentioned above, the instruction booklet is the most comprehensive I have ever seen. It’s broken into eight sections (engine, cockpit, wing, fuselage, landing gear, cowling and propeller, final details, and decals and markings. Each section is broken into further sub-sections, with parts list and part counts. Multiple drawings from different angles are provided to add clarity, as well as pictures of an actual model during construction. This should aid a great deal in the placement of the smaller parts. Colors are called out for every part in Vallejo Model Colors (a conversion to Gunze Mr. Color is included in the front of the manual) and there is even a list of the paints needed for each step at the bottom of each page.

According to the Concept Notes (more below on that) ZM wants the builder to feel as if they are constructing an actual aircraft, not just a plastic replica. This leads to an amazing amount of detail, however much will never be seen. Examples include pistons inside each engine cylinder, control linkages underneath and behind the cockpit, counterweights inside the propeller hub, and in-wing fuel tanks. Perhaps a modeler wanting to show a damaged or cut-away model could take advantage of these extras.

There are only a few optional parts. You have a choice of open or closed cowl flaps, the pilot seat can built assembled with or without molded on seat belts, the instrument panel can be decaled or painted, and you have a choice in canopy style (mentioned above). There are no options for a wheels-up build. There are only two marking options. Unfortunately, they are the same options included in the Hasegawa kit.

Despite the lack of optional parts, the builder will have many options to choose from in how to proceed with the build. The cowling panels can be left off, showing the fantastic details from the firewall forward, the canopy can be shown open or closed (leave it open! The cockpit detail is great), open or closed gun bays, and all control surfaces are positional.

The ZM Concept Notes (sold separately) is a reference guide and a build guide. Woven into the story of ZM’s concept of how they approached producing the kit are great reference photos of an actual J2M3. There are lots of in-process photos of a kit being built along with the appropriate reference shots. There are also three complete build stories included. One each of the two aircraft markings included in the kit, plus a bare metal scheme of a captured aircraft in US markings. Too bad that scheme is not included in the kit.

In summary, this kit looks to be a great combination of excellent detail, superb instructions, crisp molding and technical innovation. The only downsides are that some of the great details will never be seen and only two marking options are included.