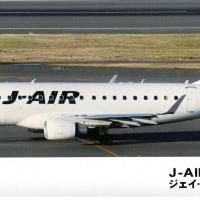 Embraer is an aircraft manufacturer located in Brazil. They started building some private and military aircraft but have found their niche by developing a line of smaller regional airliners. They started with a twin turboprop airliner named the Bandeirante and then the Brasilia. This was followed by a couple of twin jet airliners using some of the same airframe components, the ERJ-135 and ERJ-145. The engines on these aircraft were mounted at the rear of the fuselage. Following success with these products, Embraer started their E-jet series which featured larger fuselages and wing mounted twin jet engines. The initial production version is the Embraer 170. Over 1000 E-jets have been delivered as of September of 2013 and the airplane is well received by airlines around the world.

The kit consists of four sprues with forty-seven cleanly molded parts plus an in-flight mounting stand, a metal screw and a well printed decal sheet. The fuselage consists of two halves plus a single former. The metal screw is included to fit into the former and provide the required nose ballast. See the attached drawing. This is a great way to handle the necessary nose weight, no messy sinkers or clay or guessing.

The airplane windows are provided by decals. No clear parts are included. Very finely molded antennae are included with the fuselage halves. If needed, these same antennae parts are also included in a sprue if the modeler chooses to install them at a later step or if they are broken during assembly.

The wing construction consists of five main parts. The upper wing panels run from the fuselage and include the wing tip winglets. The lower center section of the wing includes the lower part of the fuselage and extends to the engine mounting area. Additional lower wing panels cover from the engines outward. The wing trailing edges and about a third of the outer lower surfaces are molded into the upper wing panels. This makes for easy gluing and produces very fine trailing edges. The model can be displayed either in flight or with the wheels down. If it is to be displayed in flight, a set of retracted wheels can be glued into the center section along with a mount for the display stand.

One minor, to me, appearance problem with the model is the thickness of the landing gear doors. If I were to build another Embraer 170, I would at least thin the edges of the gear doors to disguise their thickness. The nose doors fit into the nose wheel well and their mounting is held in place by the nose gear. The main gear doors fit onto the main gear struts with a tongue and groove attachment. It is best to glue the gear struts into the wing and then attach the gear door. If the door is attached to the strut before assembly into the wing, the combined assembly may not fit properly.

The remaining parts, the engine nacelles, the wing flap actuators, the horizontal stabilizers and a generator exhaust panel at the rear of the fuselage all install easily.

The paint scheme of this J-air bird is fairly simple – all white fuselage and gull gray wing and stab. During assembly, I noted that the wing to fuselage joint seemed tight and fit well so I elected to paint the wing and fuselage separately. This facilitated painting and made it easier to apply the decals. In particular, this made the application of the fuselage decals easier. Decals are provided for the windows along the side of the fuselage but they do not have a means of accurately positioning them. Door decals are located on each end of the windows but are not connected. I applied the door decals first and then was able to easily judge the location of the window decals. This was easier without the wings being in the way. The decal application took several days. I wanted to be sure that the door decals were set before applying the windows. Then, these had to be set before applying the J-air decal. I also did one side at a time so the decaling took longer than normal. I was impressed with the quality of the decals. One of the decals that wrapped around the engine nacelle worried me. I expected it to gap at the edges but it snuggled down readily to the compound surface. This airplane is used by a number of regional airlines and the aftermarket provides a number of very interesting sets of markings.

I enjoyed this build. It was simple to assemble and the parts were crisply molded and fit together well. I recommend this kit to all modelers with a minimum of experience. My thanks to Hasegawa for providing this interesting kit and to IPMS for letting me have this build.