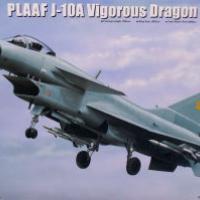 This review is a little different for me, only because I have taken over this task from John Yager, the original reviewer who started the initial work, but was unable to complete the build. However, I was still able to complete enough of this model to bring to you an honest and fair review. When I received the kit, Steps 1 thru 4 were underway, but needed to be cleaned up. Only the cockpit was complete and it was a job well done. The credit for the building should be shared with John Yager due to the hard & good work he put into what he had done.

The J-10 (Jian-10) is a multi-role combat aircraft designed for both air-to-air and air-to-ground missionsand capable of all-weather day or night operation. This aircraft has been compared to the F-16, the Mirage and the Su-27 and has been operational with the PLA Air Force (PLAAF) since 2003. The J-10 was first flown on March 22, 1998. The aircraft was certified for design finalization in early 2004. The first operational J-10 fighter unit was based at Luliang Airbase in July 2004. The J-10 is currently in service with the PLAAF, with 300 more to be ordered and another 36 ordered for the Pakistani Air Force.

Trumpeter has chosen to produce the first J-10A in 1/48th scale. This kit consists of eight sprues molded in gray styrene and also includes one fret of photo etched parts, which yields about 270 parts in total, all with fine detail, which has turned out to be consistent with all the newer Trumpeter kits.

The kit also contains a well laid-out book of directions which are simple to follow, along with two color sheets depicting the aircraft camo colors and the other one depicts the weapons in color. Each page also contains the locations of the decals.

The photo etch parts includes the seatbelt and shoulder harness for the ejection seat. The fret also provides a HUD frame, canopy mirrors, intake and a few other small details.

Some of the “positionable” parts include the ailerons, rudders, the canopy, the canards, the edge flaps, and even a choice of open or closed afterburners. The cockpit is detailed enough where an aftermarket kit wouldn’t be necessary and the ejection seat is detailed well enough for a great look.

There are two sets of markings on one decal sheet and a small stencil sheet for use on either aircraft. There is no background information for either of the markings, so it comes down to whichever you like best: the J-10A, 50655 or the J-10A, 60185. Also included are two colorful sheets which assist in the placement of the decals and the camo painting. The other sheet contains all of the weapons and shows the placement of the decals and the correct color for each weapon.

In step 2, the P.E. part didn’t fit too well, but all that was needed was some sanding of the bottom of the intake to make it thinner. I re-glued the P.E. piece in place, filled a small gap with CA glue, sanded and smoothed it out and all was good. In step 4 it was necessary to drill holes for the stores you wish to place under the wing. John had these holes already drilled and the top of the wing was glued to the bottom half with the wheel bays sandwiched in. John’s choice turned out to be a very good one, so I proceeded with the construction. The options as to how you may want certain parts to be displayed seem to be endless and I would suggest reading through the instructions thoroughly so as to decide your options. This is necessary because the drilling of holes is required before gluing the upper and lower wings together so the proper positions are correct when placing the armament in place.

There are a considerable amount of small pieces, but fortunately not much cleaning up is required because the detail is that good. Almost all of the small parts fit together perfectly and even the larger ones fall right into place. I did use some Zap-A-Gap on top, where the fuselage halves meet - but just a little. Some of the lines had to be re-scribed because I didn’t protect the surrounding panels. One other thing worth mentioning is that a considerable amount of weight was placed in the front of the fuselage and the nose to prevent tail sitting. Fortunately, there happens to be plenty of room for it.

The decals went on with no problem on top of a clear gloss coat but I chose to use Micro-Set anyway. Just be ready to spend at least a whole day of placing decals on this kit. Almost all are so tiny that they cannot be read clearly.

Overall this wasn’t a difficult kit to build but it was a very tedious one. There are many small parts but I guess they were necessary to complete the fine detail of this kit. I thought the front landing gear may be a little weak but careful placement of the kit should alleviate this. It builds into a pretty nice kit and I’m sure for those who like newer aircraft will enjoy this addition to their collection. The only reason I wouldn’t recommend this kit to young people or beginners is due to the patience required assembling the small parts and the placing of so many decals/ stencils. Other than that I highly recommend this to the experienced modelers. The kit is a little pricey but, as always, you get what you pay for.

I would like to express my thanks to Trumpeter for allowing us at IPMS to review this kit, and thanks to the review team for allowing me to do this review.

Cockpit and Canopy
Previous Next