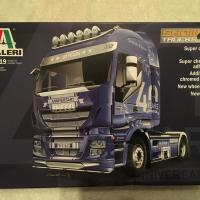 Iveco is an Italian truck manufacturer that builds some of the latest trucks and commercial vehicles in Europe. Acitoinox is a truck accessory parts company, and plays a big part in the fancy stripes and mirrored finish stainless steel 40th anniversary scheme of this subject.

The Iveco Stralis Hi-Way is a re-issued kit with new decals and adhesive “chrome” dress up “stickers”. It comes in a sturdy box that is well sized for the amount of sprues inside. The sprues are mostly individually bagged and protected.

This truck is beautifully detailed with parts reproduced faithfully to the original - outside and inside. I referred to various internet sites for picture references. The plastic is given in approximate colors of black, blue, white and chrome, so it could be built with no painting.

The instructions are well laid out with photo like pictures, a good parts map and paint recommendations.

Like all models, there is a certain amount of parts cleanup required. What I wasn’t ready for was the extensive amount of ejector pin marks to be scraped, filled and eliminated from most visible areas. Some of the worst were the inner sides of the chassis rails, vertical air deflectors at the rear of the cab, side skirts and spoiler on top. The last two having ejector marks in the majority of areas between the structural ribbing. All these parts were dealt with using all the implements in the picture attached! Nearly all parts had ejector pin of varying sizes and depths, as well as prominent seam-lines. Scraping, super glue and putty were all used. As a result, it took a huge amount of time and “elbow grease” with the large number of parts to be dealt with. Now, I have to add that this truck could be built without worrying about the ejector pins, but they really detracts from the final look, and otherwise quality of the kit. The seam lines did need attention as the impeded a flush fit. As the reviewer, I chose to tackle them, and I hope my critique of them is taken in a constructive way.

The air tanks, fuel tank, chassis, engine, drive train and suspension are built first, and assembly is straight forward. Take some time to make sure the chassis rails and cross members are square. Every tank was split down the middle, so careful seam cleanup is required to not damage raised details.

The engine is very nicely detailed, and includes various pipes and hoses. The radiator fan has ejector pin holes in every blade on the visible side. There is also quite a bit of flash that needs clean up. The engine, once completed is convincing.

The suspension and drive train are very well done and easy to build. Just make sure everything lines up and is straight. The steering is workable, and impressive. The instructions call for a heated blade to melt the plastic stub down to trap the movable parts in place. I used a bbq lighter to heat a number 11 blade to melt and press down the stubs.

The wheels are on one of the two chrome plated sprues, and careful cleanup is needed to remove the remaining sprue which is left at the rear of the wheel rim. If not completely removed the tire won’t seat properly behind the rim. You don’t want those tire coming off on the Autobahn!! The rubber tires slip over the rims and look good. Remember to get the tread pattern going the same way on all tires.

The inside rear wheel slides on the axle and a plastic retaining ring is glued to the end of the axle. I found the retaining ring was too wide in diameter. I reduced the diameter until the center “tube” (for lack of the correct term) would slide over and attach to the wheel without interference. The outer wheel is then glued to the inner wheel hub. This may have been my fault in not seating the brake disks far enough in towards the edge of the differential.

The front wheels attach to their axle in a similar way, although there were no retaining rings. I “borrowed” a polyester propeller retainer from an aircraft kit in my stash and after widening it, slipped it over the axle and glued it in place. A center “cap” hides the axle and that was glued to the hub. All wheels rotate freely.

All other tanks, air cleaners, fifth wheel, exhaust and rear wheel mud guards fit securely into slots, and the chassis is finished.

The cab interior is well detailed with decals for the instrument panel and entertainment system. The interior is built up in a modular fashion, assembling individual side’s rear, roof and floor parts. All these fit fine. The only seam I had to deal with was along the top of the dash. When fitting the dash part to the floor, make sure it is seated all the way forward flush with the front end of the floor, and against the tabs. I missed this on the passenger side which later left a slight gap between the windscreen and dash.

The outside panels of the cab are individual parts, and fit fine with plenty of test fitting. It is important to line up the tops of each panel so the roof cap fits flush. There are small tabs that fit into recesses on each side or each part. A third hand and tape are handy to hold things together.

The windows are all nice and clear. The front windscreen is very fragile, and attaches to the front cab panel. If you have the dash positioned right, just the top needs gluing. Through adjustment and alignment of the front and two side panels, I ended up with hairline cracks through windscreen. I tried to hide these with another coat of Future Floor wax, unsuccessfully.

Mesh is supplied for the grills, and all have correct measurements and sized cutting templates, except one, where it had correct measurements, but too small of a template. Guess how I found out!! There is enough mesh to account for mistakes, but it is advisable to measure before committing to the knife. On this particular truck these are all covered with “chrome” grill stickers on the outside, so the mesh can only be seen on the inside.

The decals are superb. I painted, and applied what I could to the cab sides before they were assembled. Most snuggled into recesses and panel lines with minimal help. A couple of them were too large and could not be used. There is meant to be a name and stars on the side skirts (decal 23), but they wouldn’t fit between the stripes, and were too long. Also, the decal covers that spell Hi-Way on the spotlights are too small. They should be the same diameter as the lights.

The “Chrome” stickers look impressive on the sheet, and most are usable. The rear vision mirrors are catered to with mirrors and front applique’s, but the stickers do not adhere to compound curves, leaving ugly raised edges on every corner. I ended up using metal foil instead on the mirror side. This is disappointing, as they would have looked really nice. An option may have been to attach them to the flat inside of the mirror glass, and have it reflect through. I left the front parts of the mirrors black. The sun visor had the same problem. I sliced the raised areas and pressed down, which helped, but still doesn’t look that good. For the amount of money this kit costs, the modeler is going to be upset that these stickers don’t look better when applied. I even tried heating them with a hair dryer to soften them to no avail.

A second chrome plastic sprue contains all the dress up accessories and spotlights. I used sprue cutters to carefully remove the parts I needed, and used metal foil to hide the damage to the chrome plating. As with the chrome stickers, you are given lots of extra items to “doll” up and individualize your truck. You could really go to town, dressing up your truck! Take a look on the Acitoinox website to get some ideas.

Italeri suggests a metallic blue, or Blue Angel blue as a close match. I undercoated the blue areas with silver and used Model Master Acryl metallic arctic blue. I used nearly two bottles of blue for the vast amount of parts, and for coverage.

All the rest of the last minute items, like mud flaps, horns, mirrors, lights and chrome parts, were added to finish an epic looking Euro show truck.

For me, this kit was a mixed bag. Part of me thinks a fairly new modeler could handle the build, as there are areas that just fell together. The build sequences are also logical. But then there were areas that really tested my abilities as an experienced builder. There are a lot of parts that need cleanup and attention.

For a retail price of nearly $70, the beginner may be dissuaded, but the dramatic appeal of the box top is certainly eye candy! Despite the hard parts, I’m glad I had the opportunity to tackle this one, as it really looks cool!!

I would like to thank Hobbico, Italeri and IPMS for the opportunity to review this Iveco truck.

Box side with decals and chrome sheet

Cab inside driver's side

Cab over engine right side

Front Wheel with Retainer in Place and Glued

Side Skirt and Name Decal Too Big

Windscreen Taped for Gluing
Previous Next