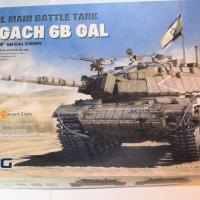 The Israeli Defense Force has a long tradition of importing U.S. weapon systems and upgrading them to meet their needs. The Magach series of tanks are based on the M48 and M60 tanks. The Magach 6B Gal is a modernized version of the M60A3 Patton and the addition of the Gal designation came with a new fire control system. The Magach 6B Gal was used as a front line vehicle for many years, serving alongside the Merkava series of main battle tanks.

As usual with new Meng releases, the box includes an impressive collection of extremely well molded sprues with no visible mold issues or flash. There are eleven sprues in sand colored styrene, two sprues of clear parts, four sprues of track parts, a ladder of poly-caps, a sheet of Photo-Etched (PE) brass, small metal tubes, a sprue of tan rubber, a decal sheet, separate parts for the hull/turret and one machine gun, and the instruction booklet. There is ton of detail packed into the box and as usual with Meng kits there are no issues with the parts included.

Before moving on the build of the kit I do want to highlight the instructions. These have been printed differently than previous kits that I have built from Meng. They are printed on slightly glossy paper that is similar to what the covers of other instructions are printed on. The instructions in the steps are very different from what I am used to, everything is printed in 3D and the center hull is always dark grey while the parts to be added in that step are in bright colors. For the detail painting, the small parts are printed with the correct colors where they are supposed to be painted. Due to these simple changes these might be the clearest and easiest to use instructions I have ever used when building an armor kit.

The build starts with the lower and suspension and there are no real surprises here. I had no issues with the fit of any parts that went into the suspension. I did leave the tail lights, E7 and E8, off until later in the build to allow for easier detail painting. My only issue with the suspension is that the torsion bars are produced in two parts. In the past, Meng kits had a one piece molding for this. However in later releases this was replaced with a weaker two part assembly. In this case the attachment points were better but I still left the torsion bars off until near final assembly to make sure that none ended up broken. I also left the steel tubes off in step 7 to allow for easier painting. I will say that once I installed the steel tubes, that they were a vast improvement over typical moveable suspension. They are much easier to work with and made keeping the suspension workable much easier. I also left the road wheels and tracks until the end of the build.

Moving on to the upper hull. I left all the view ports off until the end, for this kit this is extremely easy as they are only molded from the outside. This means that if you are building with the hatches open you will need to replace the periscopes but it does simplify the build. One thing to note is that in Step 12, you need to add the typical hull plate number for IDF vehicles, this is nicely produced in PE but there is no decal for it. So you will have to paint the plate and dry brush the numbers. Take care to not miss the large number of holes that you will need to drill in the upper hull, side skirts and turret for the ERA tiles. The instructions have helpful callouts starting in Step 11 but there are a large number and it can be easy to miss some.

I had no real issues with the assembly of the upper hull. All of the parts fit really well and the instructions are very clear about placement. I did leave all of the ERA tiles off of the turret and hull until after the base coat was complete, there is a lot of detail here and I recommend doing this to ensure that you get full coverage behind and around the tiles. The only fit issues that I had were in Steps 13-14 and were related to the mating of the upper hull to the lower hull. This is a complicated assembly with a large number of parts and I had some slight fit issues that made it necessary to fill gaps around the edges with Mr. Surfacer and putty. All issues were easy to deal with and the large parts count for the engine deck means that it will be much easier to add aftermarket parts to open up the engine deck. I left all of the tools and head lights off until final assembly.

Next up is the build of the turret. I don’t have a lot of issues to report from the assembly of the turret. In Step 22 there were minor fit issues with this turret base to the upper turret. It did require some filling/sanding to correct some minor gaps. Pay attention to the note for the drilling angle in this step. In Step 24 the mantlet cover is installed, this is the largest part of the tan rubber set of parts. This rubber is easy to work with, it responded well to super glue and Testors Liquid Cement. My only issue with it is that fit is tight to the turret and once it is installed it sort of locks the main gun in position, unable to move. As with the hull build I left all tools, tracks and ERA panels off until painting was complete.

The last two parts of the turret build before painting was the barrel and the basket. The basket is a complicated assembly made up of ton of tiny parts. The parts are extremely well molded but fragile. Be very careful that you don’t break any of the railings or basket parts. The engineering here is impressive and I had no issues fitting it to the turret once it was together. The barrel is a standard two piece affair with a rifled end piece. The detail is great but I do wish that the barrel was slide molded. The barrel on many IDF tanks is jacketed and the high level of detail can be difficult to work around while sanding seams. The barrel also fit into the turret perfectly once it was complete.

I left the machine guns off until after painting. Which means that this completes the main build of the kit and brings us to painting. There are three decal sets for three different vehicles that all have the same painting scheme, overall Sinai Grey with a white stripe down the barrel. All paint callouts are for AK Interactive paints made specifically for Meng. However, I chose to paint the body color with the new MMP paint for modern IDF vehicles. I would recommend painting the white stripe down the barrel and masking it before spraying the body color.

Once the base painting was complete it was time to install all of the ERA tiles and other associated parts. I had no real issues with the fit of any of the tools or any of the ERA tiles. However, I did have some issues with the installation of the subassembly in Step 34 for parts L1, L36 and L45. I had difficulty lining up the legs with the holes in the turret while keeping L45 level. This assembly is meant to support the front machine gun and it needs to be level. Upon the initial insulation mine was tilted down pretty significantly. The only other issue that I had with the tools was with the fuel cans; the pins on Part D10 were molded short and I could not install that fuel can as directed.

Once the tools were installed it was time to complete the tracks, suspension, road wheels and smoke grenade launchers. I had no issues with the assembly of the launchers but the insulation points were a little vague. The road wheels, drive sprockets and return rollers were very straight forward with no major fit issues or molding issues. The tires are molded separate from the wheels for easier painting. Once the wheels were done, I installed the torsion bar suspension and the wheels. Everything fit great and it was easy to set the wheels at the same height. The tracks are typical to Meng kits, very well molded individual link tracks that are connected b a single pin. The kit includes clear parts for a jig that allows for easy building of a 6 link unit and the pins are inserted from one side. The instructions call for 101 links per side and this length is perfect. With no side skirts it was easy to thread the tracks on to complete the build.

The last step is to install the clear parts and decal the vehicle. I had no issues with the fit of the clear parts and it was a huge bonus to be able to install them from the outside. I chose the third of the three available schemes. The decals performed perfectly over a light coat of Future and with a little Micro Sol. They settled down well over some complicated surfaces. However the register was a little thin, so the green base coat showed through some of the larger decals.

My thanks to Meng Models and IPMS for giving me the opportunity to review this kit.