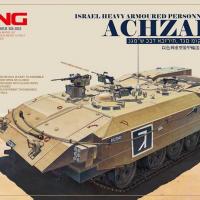 Achzarit – (“Cruel” in Hebrew with female inflection) is the name given to one of the IDF’s newer Armored Personnel Carriers. The other is Namer and based on the Merkava Chassis. The Achzarit is based on the Russian T-54/55 chassis that the IDF captured so many of in the previous wars with her neighboring Nations. No matter what name the IDF gave it, it could not describe near perfection. The Israelis are the ONLY Nation that has ever put crew protection and survivability forefront in the design of armored vehicles. The Achzarit is referred to as a heavy APC and rightfully so. It weighs in at 44 tons and is designed to transport the troops into combat and also survive confrontations in urban scenarios. It carries a dismount squad of nine and three vehicle crew members. It mounts three 7.62 FN Mags and another FN Mag mounted in a Rafael OWS for the vehicle commander. The only not perfect issue with the Achzarit is that the crew has to dismount through a rear opening clamshell door. This allows an observant enemy to know that the Infantry is coming. The initial vehicle was fielded in 1988 and since then has been upgraded with a newer more powerful engine and weapon system. The Achzarit is currently in use by the Golani and Givaty Infantry Brigades.

Meng’s newest release is almost what it says it is. Based on available photographs and Dr. Robert Mansherob’s excellent “Israeli Wild & Cruel Cats Volume 3 – Achzarit Heavy APC” what Meng almost gives you is a Achzarit Mark I variant B. This basically means that your APC is armed with the Rafael 7.62 OWS (newer versions are using a Sampson 12.7), powered by the 650 hp engine from the M109 Howitzer (newer variants are using an 850 hp engine), and modified rivet-less frontal and upper side armor suite. What Meng has failed to include is the anti-slip coating applied to all upper surfaces. Now, as this being a review kit, I will not be applying any. However, you need to know that ALL in service Achzarits have this applied. This to me is a big detractor to building this kit. Meng also did not include it on either of their Merkava releases. Academy’s newest IDF release the “Magach 6B Gal Batash” does not include it. The only company currently releasing this noticeable coating is Hobby Boss on their Merkava ARV release. Trust me; it is not an easy thing to replicate.

What Meng does include is stunning! The box art in cool (mostly because the Achzarit is a cool looking vehicle) and it is quite sturdy. You get an almost complete one piece upper hull, complete one piece lower hull, seven tan sprues, one clear sprue, two vinyl tracks (that are supposedly glue able), one sprue of polycaps, a coil of nylon thread (to be used to make tow cables), a heavy PE fret, a sheet of decals (to mark three different machines), the instruction booklet and a color painting chart.

The detail on the sprues is absolutely beautiful and detailed. All injector pin marks are light and most are hidden on the inside of the interior parts. The vinyl tracks are nice looking with a few visible pin marks on the inside runs. The skirts will hide your join if you use these for your build. The PE rear skirts are also quite impressive and will definitely add to the overall look. The rear clamshell and hatches all have the ability to be opened or closed. There is a rudimentary interior mostly along the egress tunnel should you opt to open the rear. The included weapons are nicely done. However, they are vehicle weapons and most of the FN Mags are crew served and should have the Bipod legs and front mounted sights. When the crew dismounts, the weapons dismount with them. A neat touch is the different T-55 wheels included in the kit. There are two different styles of starfish wheels included but it would have been nice to also have included some T-54 Spider wheels since many of these vehicles are equipped with them as well. The wheels might also be questionable. Late model T-55s were equipped with a larger center hub road wheel located at the front suspension arms only. However, it is plausible that the IDF have also put these on the rear support arm to improve longevity. The PE set also includes a mask for the road wheels (no idea why) and two pieces of PE are used to simulate the re-useable vehicle identification markers on the hull side. The downside to this is that Meng does not give you the loops that these markers are attached to. Overall this is a wonderful looking kit and with this being referred to as an early, I hope they will make a late model and actually provide the hull with some anti-slip texture to it.

Construction started by following the instructions and the hull was pretty much assembled in about four hours. I started jumping around and adding things or assembling subassemblies while other parts dried. If you plan to open your clamshell door, you will need to fill two large ejector marks on the right rear tunnel access. They are quite large and quite noticeable. The two smoke units are sort of iffy. They have half the launcher box attached to the mounting plates to which you attach the other half of the box and the end caps. This creates a noticeable seam that is actually a weld line (like on a T-34 external fuel tank). More noticeable than the seam should be but to try and sand/fill it would ruin detail on the launcher box. If I were to do it over, I would scratch the mounts and use some aftermarket launchers that have canvas covers mounted on them as almost all photographs show these mounted this way. Also, Meng gives you two options. These are smoke cans mounted and a solid cover to cover them. Neither is correct (at least not by photographic evidence. I have seen no metal covers mounted on Achzarits. These appear to be mounted on the Merkavas only. Also, Meng simulates a piece on sheet metal inside the box. In photographs of uncovered Achzarit smoke cans, there is no such piece. In step eight, you run into a snag. I would advise scrapping the four mount locator positions off each side of the upper hull before doing any other step. I would actually advise doing this before you do any work to the upper hull. I did mine as prescribed by the instructions after I pretty much glued the upper and lower hulls together and added all the hatches and attachments. This made scraping and sanding problematic in that I did not want to damage any of the other items which were mostly rivets.

The build continued fine. In step 13 they have you install part E13. This part is a metal/rubber cover for the Commander’s externally mounted C Box (the box that allows the Commander to talk to the crew or on the radio). This is too short and too narrow. I would advise making one yourself.

The vehicle was given a coat of Model Master Israeli Armor Sand/Gray. This is still my favorite color for modern IDF armor. I can mix it with brown yellow or white to get varying shades so all my vehicles don’t look the same. The tracks were also painted at this time. These were given a base coat of Military brown and then a black wash. The tracks were then dry brushed with the brown mixed with yellow to lighten the effect. Finished the tracks with Aluminum dry brush for that freshly driven look. The tracks were quite thin and “flexie”. They actually started to bow around the drive sprocket and getting them to lie down on the road wheels properly would be next to impossible. The kit would definitely benefit from the addition of Fruil, ModelKasten, or Masterclub. They took the paint well and no chipping or flaking was noticed.

The rest of the vehicle build required the assembly the OWS and crew machine guns. I used the provided tow cable material and if you have access to parachute chord guts I would advise using that instead. I snagged one of them on a finger nail and it actually pulled it out like a sweater.

Since I was not going to be using the canvas flag markings, I opted for the second most colorful version which belongs to the 2nd Squad, 3rd Company in an unknown Brigade operating in a security zone near the Gaza strip in 2008.

This is a really nice kit! Since I started mine, I have seen others builds and if you add enough stowage over this vehicle, the lack of the anti-slip texture will not even be missed. Can’t wait to get started on my own build.

I would like to thank Meng Model for releasing and providing this kit for review. This is the first styrene release of this incredible APC. I want to thank Dick and Dave and IPMS/USA for allowing me to review it. Go out there and pick up one of these new “Cruels” and enjoy the build.