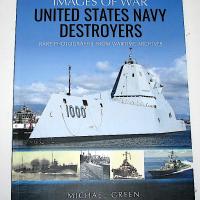 The Author: Michael Green is the author of numerous acclaimed books in the Images of War series.

This classic Images of War book traces the key role played by destroyers of the United States Navy since the first order for 16 in 1898. Prior to the USA’s entry into the First World War a further 63 destroyers were commissioned, and due to the U-boat threat, 267 more were authorized by Congress once hostilities were joined.

Between 1932 and Pearl Harbor, ten new classes totaling 169 destroyers came into service. During the war years American shipyards turned out a further 334 vessels. Of the three classes, the 175 Fletcher-class were judged the most successful.

The Cold War years saw the development of seven more classes. More recently 82 of the stealth shaped Arleigh Burke class have been ordered but the futuristic Zumwalt-class program has been curtailed for cost reasons.

I’d like to thank Casemate publishers for providing this book and the review Corps for letting me review it.