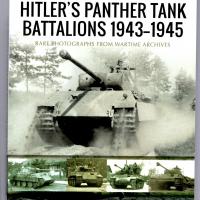 Ian Baxter is a much-published author and photographic collector whose books draw an increasing following. Among his many previous titles in the Images of War series are Hitler’s Boy Soldiers, Nazi Concentration Camp Commandants, German Army on the Eastern Front – The Advance, Germany Army on the Eastern Front- The Retreat, The Crushing of Army Group (North) and the SS Waffen Division series including SS Leibstandarte Division, SS Totenkopf Division At War. He lives in Chelmsford, Essex.

Hitler’s Panther Tank Battalions 1943-1945 is another fine publication of the Images of War series to which over 30 titles belong. As with all of the books of this series, it is packed with black and white photographs, well-researched technical documentation, and highly useful appendices.

As you can see from the table of contents, this book focuses largely on the Eastern Front and Italian campaigns. The introduction holds some very interesting information about how the tanks were put through their paces. One photograph shows a Panther sitting in a water tank to test it for leaks within the engine compartment. It never would have dawned on me that water intrusion would have been tested like this.

Chapter One contains excellent information and photographic references on the Battle of Kursk—a favorite diorama subject of many armor modelers. The photographs are sure to inspire some great model building. Each chapter could be turned into its own book—and indeed there are many. The perfect thing about this book and all of the “Images of War” books is that the chapters encapsulate just the right amount of information and utilize photographs to complete the story.

This book has some very interesting depictions of tanks being loaded on to rail cars, Panthers in urban settings in Italy, daily life, and duties of battalion crew, and of course, battle scenes. The appendices are excellent. If you have ever been curious about how panzer battalions were composed or what makes the difference between an Ausf. A and Ausf. D, this is your resource.

This book is a 10 out of 10, and for the German armor builder—and of course for history lovers—this book would be a valuable asset to your collection! Ian Baxter is a standout author, and I am always astonished at the many interesting photographs he discovers through his research.

Thank you to Casemate Publishers for providing a copy of this book for review.