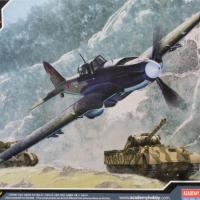 Mortal rivals, the Soviet Il-2m Sturmovik and German Panther Ausf. D represent pinnacles of combat capability for their respective nations in the 1944 timeframe. Often eclipsed by the mighty Tiger tank, the Panther proved to be an extremely lethal and far more maneuverable and reliable little brother to the larger and more finicky Tiger – truly one of the best all-round tanks of World War II. To stop the Panther and other German armor on the Eastern Front, the Soviets relied on the tank-busting Il-2m Sturmovik. The heavily-armed and armored IL-2 family of close air support aircraft proved a reliable and effective gun platform for dispatching the relentless waves of German armor.

Upon Accurate Miniatures’ bankruptcy sale of tooling to Academy, the latter has been steadily re-releasing Accurate’s outstanding product line under the Academy label. The Il-2m, as some accounts have it, was never released in 1/72 by Accurate prior to its demise. The quality and crispness of parts and decals are consistent with Academy’s and Accurate’s high standards. Parts are molded with fine recessed and raised detail. Decals are printed with great color and clarity and are in-register, providing markings options for 3 aircraft. Unfortunately, the options do not correspond to the location and time periods of the Panther’s Kursk marking options.

For the Panther, Academy draws upon Zvezda’s nicely detailed Panther D. Molded in dark yellow, surface detail is crisp, although with some flash cleanup required. Tracks are thin and flexible and side armor plating is very thin, too, making both very delicate in assembly. Markings are provided for 3 Panthers during the Battle of Kursk in 1944. Snap features are offered for a quick and glue-freed build.

The Sturmovik build was straight-forward. Generally speaking, part fit was good, although some filling was needed for the lower wing root and the upper fuselage seams above the wing root area. Instructions were sketchy in several places, so modelers’ license was invoked to keep the build moving forward, but with suspect accuracy. Landing gear assembly required a significant amount of patience, and would’ve been best served with 3 hands. Prop assembly required a bit of iteration, too. Press fit for prop shaft into fuselage left about a 3mm gap between back of spinner and front of fuselage. Upon attempting to remove the shaft, it broke, and the prop was glued to its remaining nub.

The Panther progressed nicely until it came time to stacking up the road wheels and adding the tracks. The combination of finely toleranced holes and pins and thin plastic required locating holes on road wheel layers to be opened up with a hobby knife. Similarly, the fine detail and tight tolerancing of the tracks and drive sprockets prevented the sprocket teeth from fully embedding in the tracks when pre-painted. The narrow diameter axles on the idler wheels resulted in the right one shearing during track installation. While fussing with that, the right track also fragmented in 2 places, with the overall result being a deformed idler/track interface. A tough nut to crack at any age and skill level. In hindsight, we’d have been better advised to pre-assemble the road wheel stack-ups, then dry-fit them, the drive sprockets and idlers, then glue the tracks to the dry-fit running gear, remove, paint, then re-install.

Sturmovik painting and finishing employed Tamiya XF-23 for the underside and XF-64 Red Brown for some upper camo areas. Model Master FS36081 Euro I Gray and FS34102 Medium Green were also applied to upper camo areas, along with Vallejo Model Air NATO Black. Model Master RLM02 Gray was used for interior surfaces. Minwax Acrylic Gloss was airbrushed to provide a high-gloss surface for decal application. Decals, locally manufactured in Korea, were applied using the Microscale System, but required multiple applications – and finally application of Solvaset – to settle down into the recessed detail. This is an ongoing trend we’ve noticed with some Academy kits lately. The departure from Cartograf decals is noticeable. Decals were sealed with 50/50 Future/Model Master Flat Acryl topcoat.

Panther relied on Tamiya Dark Yellow and Dark Green (XF-61) for its primary colors. Like the Sturmovik, Minwax Acrylic Gloss provided the smooth base for decals, and decals were finicky and required repeated scorings and application of setting solution to settle down. After sealing with the 50/50 Future/Acryl Flat mix, MiG European Dust pigments were applied over the vehicle, and MiG Dark Earth pigments were mixed with turpenoid and applied as mud on tracks, road wheels, and select lower hull areas.

Academy’s merging of the Accurate Miniatures 1/72 Il-2m and Zvezda’s 1/72 Panther D is a great marketing idea. Although the format is appealing to young modelers, the kits are best suited for experienced modelers willing to work through some fit and finesse issues throughout the build of both kits. They do build up into very nice representations of their respective prototypes, and would make great additions to collections of fans of the Great Patriotic War.

Many thanks to Model Rectifier Corporation for the review sample and to IPMS/USA for giving us an opportunity to build these classics and share our experience with you.