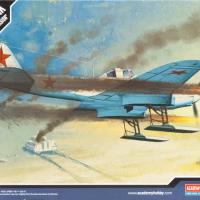 Construction of this kit, like with most aircrafts, begins with the cockpit. It is nicely detailed, with raised detail that makes dry-brushing simple and effective. The fuel tank assembly has a somewhat large seam, but it is barely visible in the finished model, so I didn’t spend much time fixing it. Seat and harness (provided as a decal) look good. There is an armored plate piece (molded in clear) that needs to be partially masked for the “over the shoulder” armored glass window.

There is a long rod that connects the control stick with the back of the airplane. It is actually too long and it will interfere with other parts. I think its extra length is because of a double-seater option with the same molds. I trimmed the rod just past the armored plate and before the fuel tank.

With the cockpit assembly completed, I’ve moved into the main assembly of the fuselage and wings. I knew that this kit had some assembly issues, so I choose to deviate from the instructions. I did it at my own risk, and overall I feel like I have succeeded.

The first thing I did was to glue the upper wings to the fuselage sides. That way I got a perfect wing root assembly. Once that was done, I assembled the fuselage half noses to their respective fuselage sides. I had a minor misalignment on the port leading edge of the wing, but most likely it was my fault and it was very easy to fix with a bit of filler.

Having assembled both sides with their respective upper wings, then I glued the wing spar to the center lower wing part. Make sure you do this carefully, as the overall alignment will depend on it. I then presented the bottom wing (with the glued wing spar) to the fuselage sides. Everything lined up. I then dry fitted the cockpit to the fuselage and dry fitted the whole assembly. The fit was perfect. It literally snapped into place.

Happy with the alignment, I glued the cockpit to the port fuselage side, and then to the bottom center wing. Finally I added the other fuselage side and glued everything up.

From that point on, the assembly continued as per instructions, without major issues. I needed some filler to blend in the ski nacelles to the wings, but again, a bit of filler took care of that minor gap.

There are several wing balances, wing rocket rails, bomb shackles, and other minor parts that could be added at this point or be left off for assembly after painting. I choose to add them all before painting. Also, the rudder has a balancing weight that is fragile. Just be careful with all the protruding parts when handling the model for painting.

Painting was fun and easy. I pre-shaded the main wing controls and applied light blue for the undersides and two different shades of light grays for the top surfaces to replicate a worn winter camouflage. I then applied a coat of Future in preparation for the decals.

Decaling was very simple with just a handful of decals. They responded well to the normal setting solutions and they snuggled into the recessed panel lines. Another coat of Future was applied to seal the decals and an enamel wash was applied to the panel lines to pop out detail.

The landing gear is a bit tricky. Some parts have to be trimmed and other parts actually have to be twisted 90 degrees. All of that is indicated in the instructions, but it is a bit difficult to understand exactly what they mean. By the way, the way the landing gear is shown in the pictures on the side of the box is wrong. The skis have to be parallel to the ground, not at an angle (it is not water ski!).

The model comes with a nice weapon selection, with both free falling bombs and rockets. I replaced the plastic molded guns with brass tubing and I added the aerials using E-Z line. With a final flat coat, the model was ready for display and it looks great on my display case.

I might sound like I’m coming down hard on this kit, as I’m pointing out some of the fit issues and lack of detail on the instructions. But don’t get me wrong – I’m pointing those things out with the intention of making your build easier.

The kit is good and I’ve found the building experience very enjoyable. All the parts will fit if you take your time and align everything properly. The main drawback in my opinion, were the instructions.

Recommended for the modeler with some previous experience, due to some of the complexity in assembly.

I would like to thank Academy, Model Rectifier Corp, and IPMS/USA for the review sample.