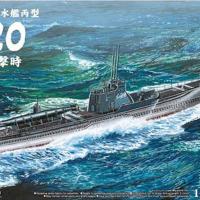 The I-20 was a Type C-1 Class submarine, which was based on the Junsen-type, developed from the Type KD6. The C-1 Class was designed to carry the Ko-Hoteki midget submarine or Kaiten suicide torpedo. All 5 of the boats in this class took part in the Pearl Harbor attack on December 7, 1941. All of them launched midget submarines near the harbor entrance and they were never expected to return to the mother ship.

The kit was released for the 70th anniversary of the Pearl Harbor attack. There are examples of the midget submarines at the Naval Submarine School, Groton, Connecticut. While I was in Submarine School I was able to walk around them and take some pictures. In the end, the I-29 was finally
sunk by the USS Ellet in late August of 1943.

The kit comes with a really nice 16-page instruction booklet which leads you through the assembly process. The steps are pretty logical, and the assembly is well represented by pictures.

The painting instructions use Gunze color references, but there are conversion tables available on the Web. I used Gunze’s Aqueous Hobby Color #82 (Dark Gray) for the main hull color and Vallejo # 70859 (Black Red) for the bottom color. After the paint dried, I washed the whole thing in “The Detailer” black. The interesting part was trying to make the wooden deck look like wood. To do this, I used Tamiya wood color and washed it in “The Detailer” black wash also.

The decal sheet comes with 3 sets of hull numbers and some Japanese flags. The instructions for the I-20 only called for the hull number to be placed on both sides of the sail. The decals work pretty well and don’t silver.

There is a small PE fret included for the midget submarine, with the strapping for the mini-sub and its nose. There’s also a wonderful metal cannon barrel for the deck gun, which actually has the muzzle bored out. This looks VERY good.

Before you start building, you need to decide whether you’re doing the boat submerged or surfaced, which will make you follow either path A or path B in the instructions. Since it is your model you can put as much or as little on it as you want. Since this is only my second 1/350 sub, I decided on the simpler “under way” version, with all unnecessary gear such as cranes, antennas, and masts stowed for sea.

Assembly was pretty easy. The fit of the hull, base, deck and conning tower were flush and clean, needing only a little filler.

Recommended, particularly if you’re interested in either Pearl Harbor or subs with unusual missions. The kit goes together easily, but as with all small-scale kits, be careful when cutting parts from the sprues. I felt pretty good doing this model and I’m very happy with the results, especially since I’m way outside of my comfort zone of 1/72 aircraft. I’ve always wanted to build some of these submarine models and now I have two under my belt.

Thanks to Dragon Models USA and Aoshima for providing an interesting model. And thanks to IPMS/USA and Steve Collins for allowing me to build and review it.