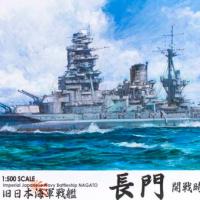 In 1941, the IJN battleship Nagato(already 21 years old and 5 years after her last major re-fit) was the flagship of the Combined Japanese Fleet, flying the flag of Admiral Yamamoto. On 2 December 1941, Nagato transmitted "Niitakayama nobore 1208" to the fleet, which translated into "Climb Mount Niitaka on 12/08" (12/07 Hawaii time).

First, many thanks to Fujimi for providing this kit for review. This kit is well thought-out, engineered and designed and features excellent detail and fit for a 1/500 scale kit.

Inside the box are 21 sprues of gray, black and clear individually bagged parts, a 9 1/4" x 14 3/8" instruction booklet, decals, a metallic nameplate label, a length of anchor chain and a 1:1 size, 5-view color chart for reference.

The wording in the instructions included with this kit is written in Japanese. There are a few general notes up front that have an English translation but these have nothing to do with the kit. For the experienced modeler, this shouldn't be an issue but it would have been particularly helpful to have a few more guide notes on assembly and painting. Some of the assembly sequence instructions could have been a little clearer. This could be accomplished with better use of hidden lines/arrows and arrangement of sub-assembly diagrams such as in Step 8 - assembly of the main tower. The color, 5-view chart, it turns out, makes an excellent 2nd reference for locating and positioning of some detail parts. You should study the instructions closely and follow the flow of building the subassemblies.

I can't say enough about the engineering and thought that went into the design of this kit. The quality of molding is excellent.

Careful attention was paid to designing the molds such that where ever possible, the plastic was fed into the mold 'out-of-view' on the part - where you don’t have to deface the parts to clean them up after detaching from the sprue (and with the fine details molded on many of these parts, it doesn't take much trimming or sanding to mar or remove them).

No uneven surfaces, voids or ejection pin marks (or any other marks for that matter) were found in the plastic and only the smallest amount of flash on the main gun barrels was seen

(1 gentle pass with the edge of a #11 blade corrected that).

This kit builds into a full-hull model with a set of nice display stands and metalized nameplate.

If care is not taken to hold on to the part when it is clipped/cut from the sprue, it will shoot off, never to be seen again. Care must also be taken removing parts from the sprues to insure the entire post/tab is not cut off. Many of the small parts are attached to the sprue through a post/tab that fits into a hole/slot somewhere else. The devil is always in the details.

Again, the parts fit incredibly well together. The hull is in left/right halves that lay together without being held.

There is a series of 13 bulkheads with 2 pins on each side, which fit into holes in the hull halves. These bulkheads precisely control the spacing of the hull and the deck parts settle right down into place.

The hull halves & bulkheads can be dry-fit and a bead of liquid cement run down the inside. When done well, the resulting seam will require no other finishing before painting.

The 8 main guns and the 18 14cm (5 1/2") waist guns all have the bores molded in - amazing at this scale! (see photo above) These gun barrels also have the boots molded on and can be painted on the sprue and installed.

The scribed rib details on the wings and tail of the Nakajima E8N "Dave" spotter aircraft are very plain (& deep for this scale) but a coat of paint helps blend them nicely.

The float struts are very small but very clean. The fit is so precise that a coat of paint prevents the plane from being mounted to the launch rail without some pressure. Problem is, with just a little pressure, those float struts will collapse.

There are 2 parts to each of the 10 batteries of 25mm anti-aircraft guns and 5 parts to each of the 12.7 cm (5in) gun batteries. Incidentally, direction on assembly of the 5 in guns is not too good. The base actually has hinge pins and the twin 5 in gun part actually has microscopic grooves as if they could be assembled and expected to elevate (?) (they probably could be by someone really talented).

The buildup of the superstructure from this point, with a little patience, will go per plan. Sub-assemblies were dry-fit, painted with the base IJN Gray, taken apart, the details painted/weathered and then reassembled. The forward tower has seven (7) mast supports that come down at an angle from the top, through the decks, to holes located in the decks below. The precise alignment of the parts is something to behold. So precise is the alignment (as with the aircraft), a layer of paint will make a significant difference in the ease of assembly.

It's best that this kit be painted/weathered along the way through the build. Fortunately, the main 2 colors needed are IJN Gray and Wood Deck Tan and the tan is not necessary after a couple levels above the main deck. The raised deck details (port holes, water-tight doors, rain brows, etc. respond well to brushed-on weathering.

The decals are of the traditional waterslide variety and consist of markings for the spotter planes and the 'Rising Sun' flag. I made no attempt to use the decals for the aircraft. It was much easier to just dab on the red dot with a toothpick.

When complete and the decals are on, the entire ship can be finished with a coat of clear flat finish.

The 1/500 scale Nagato is a fantastically engineered kit. Careful consideration was given to detail, even during the development of the molds and molding processes.

I highly recommend this model, not just for modelers with some ship building experience but for anyone with interests in navies of the world, battleship fans or historians. At 1/500 scale, the Fujimi Nagato is the right size for a book shelf display without sacrificing any of the detail.

For the experienced modelers, there are a variety of aftermarket parts available to further enhance the basic kit including a highly accurate, laser cut, wooden deck appliqué from Fujimi and the scale photo-etched railings, ladders, antennae, etc. from a variety of suppliers.

Thanks again to Fujimi for providing this review sample and thanks to IPMS/USA for giving me the opportunity to do the review. This kit was a pleasure to build, straight from the box.

Example of seam after cementing