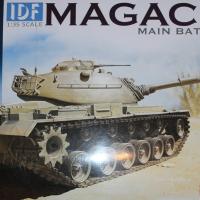 Early in the 1960s West Germany and the US agreed to bolster the Israel Defense Forces (IDF) tank forces by beginning the process of replacing their aging fleet of tanks with more modern M48A1/A2s. In all around 150 M48A1s and 100 M48A2s seem to have been sold to Israel during this time. It is a little unclear from the resources that I have when the upgrades exactly started to these M48A1/2s but the intent was to upgrade them to the M48A3 specs by replacing the gasoline engine with a more reliable diesel power plant, improved communications equipment, and the lowering of the command turret’s profile. They also began swapping out the original 90mm main cannon with the British 105mm L7 from the Centurion. Some of these upgrades seem to have started before the outbreak of hostilities leading up to the 6 Day War in 1967 but it is unclear from my references to what extent they were completed and how many fully upgraded Magach 3s served during the 6 Day War. But after the end of the 1967 war all M48s, including a few captured from Jordanian units, were upgraded to Magach 3s.

On the heels of their release of the Magach 1/2, Dragon has now released the Magach 3 as the next kit in their 50th anniversary of the 6 Day War series.

Looking through the instructions, one of the first things that you notice are a large number of extra parts included in this kit. This kit appears to be the current Dragon M48A3 (#3546) with the 105mm cannon from their M60 kit and sprues for the Magach 1/2 kit. The marketing on the back of the box seems to indicate that there is a brand new lower hull plate and upper hull plate but near as I can tell, these come from the original sprues for the M48A3 (#3546). But there are a large number of parts unused in the usual Dragon style, including almost the entire new fret from the Magach 1/2 kit, so this could be an error in the instructions.

Moving on to the build of the kit, all of the base kits have been built and reviewed extensively so I will mostly concentrate the full build and the additional parts that make it a Magach 3. As usual for Dragon, the parts are molded in a nice, hard light grey plastic. The overall detail is, as you would expect, awesome but there are a lot of mold lines, especially on the road wheels and return rollers. This requires a fair amount of work to clean up each road wheel. This the first Dragon kit that I have built where they included the tires separate from the wheel hubs. This is a nice addition, as it makes the painting of the wheel hubs easier, but the wheel hubs also have mold lines. As they won’t be seen, they probably do not need to be removed but I did sand them off anyway because they might affect the fit of the tires onto the hubs. As the base kit is almost entirely based on the M48A3 kit there aren’t really any major issues with assembly, except for in a few small areas. When attaching parts D1 and D3 to the main hull assembly the fit isn’t great. I had both a step and a small gap but both were easily fixed with sanding and putty. The only real problem with this area is that it can be a pain to sand. Also D35 had a slight gap all the way around the part which was easily addressed with a little Mr. Surfacer. Also in step 6 you have the option of building the search light. I started the process for by assembling J31/J34/J32 separately from J32/J33. This went well but when I tried to join the two assemblies the fit was not great, they seem to be joined by a butt joint that is very difficult to work with. I also could not find any references of the Magach 3 in service with the light installed, so I ended up leaving it off of the final build.

Pay careful attention when you get to step 8 in the instructions, they list the first two parts of the trailer hitch attachment to part D35 as J21 and J22. These are actually part of the fenders; the correct parts for this step are D21 and D22 respectively. The next steps in the build, deal with the assembling and attaching the fenders. Take care on these steps, my fenders were slightly warped but with some care, it is possible to correct some of that while attaching them to the hull. Also pay attention to step 12, as there is a fit issue with the fenders and the hull. Specifically, part of the turret ring is on the fender moldings and the fit with the rest of the turret ring is not great. I ended up with pretty large gaps at the front and back that would not be hidden by the turret and that needed to be addressed. They are difficult to fill and sand due to their positions but I was able to do it with careful application of putty and Mr. Surfacer.

The rest of the build is pretty uneventful and the fit of the turret is pretty good. I had a minor problem with fitting the top half to the bottom half that led to a lip at the back. However, I think this could be solved by using rubber bands or clamps when finishing step 16. My only real issue with the last few steps is with the DS resin two-part mantlet cover. It is nicely molded out of flexible DS resin but the recoil cover has a really nasty mold line that I had a lot of trouble removing. DS resin is great for a lot of things but I have never had an easy time removing mold lines from it. Even with a brand new hobby knife, it tends to tear rather than cut. Lastly, the 105mm replacement cannon barrel is nicely molded as one piece and the kit requires no modification to accept the larger cannon.

Lastly, there is the painting and decaling, you are given four interesting options an unidentified unit, 46th Battalion 401st Brigade, "Daied" (4th) Company 46th Battalion 35th paratrooper Brigade, and the "Daied" (4th) Company 46th Battalion 401st Brigade. I chose to use the third option and the kit decals performed flawlessly. Dragon helpfully includes a 3 part paint mix for their usual Mr. Hobby/Mr. Color paints for the overall IDF scheme but I prefer to use Tamiya paints for airbrushing. So I referenced a painting guide that I have for a different vehicle that I have from around the same time period, which listed a paint mix for IDF units using Tamiya colors: 5 parts XF-65, 4 parts XF-49 and 1 part XF-57.

Overall this is an interesting kit. It builds up quickly and for the most part fits really well. The road wheels and some of the parts require some extra work but it’s nothing someone who has experience filling and sanding can’t handle. It is definitely a very interesting subject and it will not be the last kit I build from Dragon’s 6 Day War series. My only concern with the kit is the overall accuracy, as mentioned above it seems to be an up-versioned M48A3. Unfortunately, as far as I can tell the IDF never purchased A3s, they only upgraded A1/A2s to close to A3 spec. Also, the 105mm cannon seems to be a US version from the M60 not the British version from the Centurion. However, I am far from an expert on IDF vehicles and the visual differences between the A2 and A3 are small. I really enjoyed working on this kit, it builds into an impressive model and I recommend it for anyone that has an interest in the early IDF tank forces. My thanks to Dragon Models USA and IPMS for giving me the opportunity to review this kit.

Detail photo of turret
Previous Next