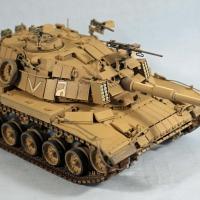 The IDF M60A1 Magach6b by AFV Club is another one of their M60 series of vehicles including the M60A1, M60A3, M60A2Early& Late version and the M728 CEV as well as several foreign subjects based on the M60 series of tanks. The M60A1 Magach 6b is the version of the Magach 6 that was upgraded with Explosive Reactive Armor tiles. This kit includes sprues from the common components of the hull and turret and running gear. The Magach 6b specific components are included to model the vehicle.

In 1971, the IDF (Israeli Defense Force), procured 150 M60A1 Tanks from the United States in part to replace the slower British Centurions. They named them Magach 6 and the M48A5’s (Magach5) were deployed to the open terrain of the Sinai Peninsula. This Armor was in operation during the 1973 Yom Kippur war and suffered high casualties due to the Egyptian deployment of wire guided anti-tank missiles and RPG 7’s. The IDF continued to procure after the Yom Kippur war to replace M48’s and M60’s that were lost due to battle casualties and attrition. By the late 70’s The Rafael Company developed Explosive Reactive Armor tiles that could be fitted to the exterior of armored vehicles to prevent losses to anti-tank missiles and rocket propelled grenades. In 1980 the IDF upgraded the Magach 6 with an upgraded Continental AVDS 1970-2C Diesel engine and other components including ERA tiles and re-designated it the Magach 6B. In 1982, the Magach 6b saw battle in Lebanon. The US Marine Corps upgraded 170 of its M60A1 tanks with the IDF ERA tiles used on the Magach 6B, along with other modifications.

There were approximately 15 sprues molded in clear, black and olive green plus the metal barrel decals, vinyl components and tracks. Parts count is over 500

The instructions are a 20 page booklet with a color slick front page and the color slick 4 view schema rear page for the four decal options. There is a Sprue Tree map on page 19 and a notes and colors chart on page 2. There are 36 assembly steps. Discrepancies will be noted in the build notes. There is a separate color box art flyer.

Not much here, the two tracks are some sort of synthetic rubber but it is connected by a pin so you don’t need to glue it or staple it. The section that is pinned can be torn so be careful

The fenders and associated hardware are covered by steps 13-19. There are extensive brackets that reinforce the attachment of the fenders themselves as there is a single side with a thin cement line to hold it. Pre-assemble the fender boxes and the air cleaners before mounting them, the box latches are small and can be lost (C81). In step 18 you have to assemble the spare track blocks which have mounting brackets that are delicate, use caution.

Step 20 shows the upper and lower front hull armor tiles being attached. The lower (W10) and upper (W9) are one piece with multiple tiles molded so this is easy to locate as there are marks, however faint. To position it look at the overhead view. There are multiple individual tiles to locate as well shown in the overhead view. The headlights and headlight guards as well as couple of fender supports are also fitted in this step.

Assembly starts with step 22 where the entire main gun is put together. You have to do this as that is the only way to mount the gun into the tank. It includes the recoil assembly, the breech block and gun mount. The assembly then is glued into the turret, step 23 and the bottom glued on. Steps 25, 26 and 27 has you attaching the gunsight doghouse, hatches, antennas, bustle rack, and grunt rails. Step 28 and 30 has you attaching the turret armor tiles and a few other turret items. Steps 31 thru 35 has you finishing all the rest of the turret attached items and machine guns and mortar. The smoke grenade launchers mount on the front but I had difficulty getting the proper alignment. Due to previous armor tile placement, an alternate might be to put the grenade launcher on first and then the front turret tiles on after as you have more leeway for mounting and fitting the tiles The armor tiles (U10) had the same issue. No surprises. At this point, the turret should be complete

I started by applying a primer consisting of Krylon Color Master with Durable ColorMax Technology rattle can (Flat Black) paint. It has great thin coverage and quick drying time. I left it to dry overnight to make sure it was fully cured.

I sprayed a gloss coat on the armor tile on the turret and the gun tube for the decals to adhere to. The decals were fine, they went on easy and adhered no problems.

I went back by hand and painted, the machine guns and the end connectors and center guides on the track, As well as the smoke grenade launchers.

A dusting of Vallejo 71.027 Light Brown was used to cut any remaining shine and simulate a coating of road dust,

This kit will build up into a nice representative of an M60A1 based tank as used by the IDF. Due to the part count, it was a challenge but you are rewarded by your efforts

I would like to thank AFV Club for the kit to review and IPMS for the opportunity to review this kit. Thanks for the crew support of the reviewers.