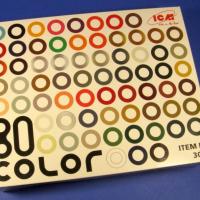 I have been using enamels for many years (a couple of decades) now. Enamel hobby paints are getting hard to find and there are the health considerations on enamels, so I have been exploring different acrylic options out there. I was surprised to find out that ICM Models from Ukraine has released an extensive set of paints that are acrylic and water thinnable.

The 80-Color boxing includes 77 actual colors and 3 varnishes: matt, satin and gloss. There is no thinner included in the boxing, but that is nitpicking. The box says that you can thin the paint using water.

Based on the number scheme (ie jumping from 1077 Dark Blue to 2001 Matt Varnish) I would venture to guess that ICM plans to release even further colors.

The already released colors include sub-groups of highly saturated basic colors, clear colors (ie semitransparent), metallic colors and a great selection of civilian and military colors for basically all your modeling needs.

The ICM Facebook page included a conversion chart to other paints, and I included them in the review. As you can see, each ICM paint matches an AK interactive existing color and also some -but not all- other colors from manufactures like Tamiya, Humbrol, Vallejo, Gunze, Revell, Real Colors and Citadel, plus standards like RLM, RAL and FS

These paints have little odor and are water soluble but, in my tests, I decided used both AK Interactive Acrylic Thinner and AMMO by Mig acrylic thinner. ICM makes their own thinner but it is not included in the box.

The paints come in 12 ml bottles (I took a picture of a bottle next to a Micro Sol bottle, so you get a sense of its size). They are certainly small and depending on the bottle, filled somewhere between half and three quarters of the way up. The paint is pretty thick on the bottle, so you need to add at least the same volume of thinner meaning they go a long way. Compounding the high-density pigments used -which means you coat or two are enough to build a good color density in the part- you can easily get one or two 1/48 or 1/35 models done with each bottle.

I have to say that I did find a very faint smell on these paints. It is not strong at all and it is not “offensive” nor headache-inducing as enamels or lacquers.  The best I can describe the smell is ‘sugary’, almost like food colorant smell.

The smell lingers on the plastic parts for at least a couple of days after painting, which indicates the paint is still drying/curing or at the very least degassing. I do live in Colorado, so perhaps the high altitude played a role on the longer degassing period.

Even if the paints are curing or degassing I was able to spray different colors -all from the same line- on top of each other without a problem, even before they were fully cured. In this review I just used a piece of paper as a mask between the color bands shown in the images and spraying the different colors happened within a minute or two from each other.

I also attempted to do fine lines (think “smoke rings” from Italian camouflage) and you can see the result in the pictures. There are not perfect, but there aren’t bad either. The main challenge was the user (i.e. myself) rather than the paints as you can see there is little overspray outside the thin lines.

After giving the paint 24 hours of drying time, the stress test began. I burnished tape on the plastic wing and rip it off, band-aid style. No paint lifting at all. I then got a new piece of tape, burnish it down and left it in place for a few days. Rip it off band-aid style and no damage whatsoever to the paint. I finally lightly dragged my fingernail across the paint and there was no damage to be found. I should point out that all colors were sprayed on top of a coat of “One Shot” gray primer (from the AMMO by Mig line) which was given a full 24 hours to cure before spraying the paints.

If the paragraph above sounds familiar, is because whenever I do a paint review, I have a process to test them all the same way.

To clean the airbrush cup, first I flushed it with water and then used a few drops of the Ammo Acrylic Cleaner (A.mig.2001).  It took about 30 sec to do a clean up between colors. After spraying all the different colors, I took apart the airbrush and clean it up with a paper towel damp with the cleaner and then another piece of paper towel with water.

To summarize my findings:

I have to say that I am quite happy with these paints. I will be using them in future builds and would certainly keep adding them to my selection of paints in the future, if I can find them. I’m writing this review in April of 2022 and considering the Russian invasion of Ukraine I do not know about the availability of these paints.

I would like to thank ICM Models and IPMS/USA for the review sample.