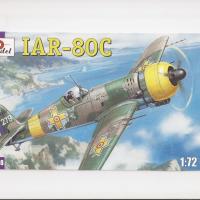 The IAR 80 series of fighters was developed by IAR Brasov, a Romanian company, and were intended to replace some of the outdated Polish fighters which equipped the Romanian Air Force before World War II. IAR, which had produced a series of low wing, single seat fighters dating back to 1930 as well as some of the PZL fighters under license, developed a ‘home grown design”, the IAR-80, which was originally powered by a Romanian derivative of the French Gnome Rhone 14K Mistral-Major radial engine rated at 900 hp. Later models used 1,025 hp K-14-1000A engines, and the IAR-80A and IAR-80B were fighter and fighter bomber developments with slight detail differences. The IAR-80C, which was built in small numbers, was the last production model, and featured two 20 mm. Ikaria cannons, tail bracing struts, and racks for external fuel tanks. Survivors of the war were used by the Romanian Air Force until the late forties, and some were converted to two seat trainers.

In combat, the IAR-80 did fairly well, and some were successful against American fighters escorting bombers attacking Romanian oil targets. The IAR 80 was essentially a defensive fighter, with a range of only about 450 miles on internal fuel, and a maximum speed of 342 mph at 22,000 ft. In combat, it was often misidentified as an FW-190 by Allied pilots. Most were used against the Russians. By about 1943, the IAR-80 had been recognized as obsolete, and many were replaced by German Bf-109G’s, with the IAR-80’s being used mainly for oil-target defense.

The kit is molded in soft grey styrene, and consists of 62 plastic parts and one clear canopy. As is true with most A-Model short-run kits, there is some flash, but this is not a serious problem. A number of parts are labeled “not for use”, but these are mainly landing gear and external ordnance parts. The interior consists of a floor, seat, front deck, rear headrest, stick, seat, instrument panel, and sidewall details on the fuselage inside surfaces. The fuselage halves have no attachment pegs, and the rudder is cast on one side of the fuselage. The engine is molded in two separate cylinder banks with minimal detail. The crankcase front is merely a long cylinder, which mounts directly to the prop and spinner. That the cowling is separate is good, because it is easier to paint in the yellow identification markings that these aircraft carried. The wings are in three pieces, with a bottom section and two upper wing panels. The wheel wells are cast as a separate unit, and the elevator assemblies are to be butt fitted to the rear fuselage. Landing gear details are very nicely done, and the canopy is clear.

The kit goes together without a tremendous amount of trimming, but there are some parts that will require some serious work. Be careful with the sprue attachment points, as they are quite large, especially on very small parts, and trimming them will require and lot of patience and an even larger vocabulary of unconventional language. The cockpit interior is easy to assemble according to the instructions, and most of the color details are easy to interpret. Actually, everything in the cockpit fits, which is a nice touch. The wheel wells, which fit inside the bottom wing section, need to be trimmed to allow the wing to fit to the fuselage. The engine is probably the weakest part of this kit, with very little cylinder detail, no pushrod tubes or spark plug wires, and the front part seems to be a bit too long. I eliminated a couple of parts, and the thing came out looking OK. The exhaust stacks are very petite, and are supposed to be installed before the cowling is attached to the fuselage, but this would necessitate some pretty delicate painting, so I installed the cowling first and attached the stacks later, trimming them to fit.

Obviously, the plane needs to be painted before assembly goes along too far, and the yellow theater markings should be applied first. I used RLM 04. The color is similar to, but not exactly the shade of, the yellow in the decals. By the way, the decal sheet provides yellow stripes for the rudder markings, but not the red and blue that goes along with it, so I used RML 04 for the tail stripes also. I much prefer painted tail stripes to decals anyway, so this wasn’t a problem. The decal sheet had another sheet attached with crosses with better register, as the originals were slightly off center. The little red circles in the insignia were printed separately, and can be applied as soon as the main decals are dry. Since decals are provided for one airplane only, I just followed the instructions, using my copy of Squadron’s Rumanian Air Force, The Prime Decade, as a reference. I used RAF Dark Green and Dark Earth for the upper surface, with RLM 65 for the underside, as stated in the color guide. The decals were of very good quality, and went on without any trouble, and I didn’t need any decal solution. I sprayed a coat of Testor’s Glosscote before and after applying the decals, followed by some Dullcote to get the matt surface I desired. I then used some grey and brown to weather the surface, followed by some silver paint chipping to get that “in service” effect.

After painting, I attached the landing gear, struts, and control balances. The wheels need a little bit of trimming to fit inside of the landing gear struts, but this is fairly common on a lot of major production kits, so it wasn’t a problem. The radio mast is a little weird for an airplane of this type, jutting up from the windshield structure, with the wire running from the top of the mast to the top of the vertical stabilizer. I trimmed the exhaust stacks and glued them in place, and then attached the wing tanks. There is no indication as to exactly where these are mounted on the wing underside, so I checked with photos and came up with what was probably the proper position. Also, there are no attachment fittings for these, so I had to superglue them in place.

This was a typical A-Model kit, an unusual subject, and a good detailed representation of the airplane. There was certainly a lot of work to do in correcting some of the minor faults, which is to be expected in a limited run kit. I wouldn’t recommend this kit for a beginner, but for an experienced modeler, it is good practice, and will result in an excellent model. I had already built the MPM offering a number of years ago, and still have an older vacuform kit stored somewhere, but this kit is definitely superior to any of those. In the background of some of the photos is the old MPM kit for comparison. From the looks of the kit, A-Model will probably issue different versions of this aircraft, so it is certainly worth getting at least one if you like aircraft of this time period. This kit is highly recommended for moderately experienced modelers.

Thanks to A-Model and John Noack of IPMS.USA for the review sample.