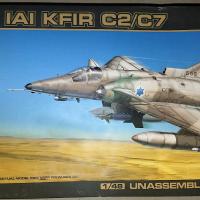 Like most kits, you have the ability to build 2 different squadrons, one from the first fighters squadron Kfir C2 #874 that has a mostly gray scale paint scheme, and one from The Arava Guardians Squadron Kfir C7 #555. Both options come with two different types of armament and the instructions are very easy to follow showing distinctions in the planes. The detail in the rest of the kit is extremely well done. The fuselage comes together very nicely and I only had to do some slight sanding on the top to get it to look like one piece. There were definitely a lot of decals to work with on this model, as I’ll get into later.

The first step is to put together the cockpit, which is where you decide if you’re going C2 or C7. There are two different panels, one specific for each model. Obviously you could mistakenly put one in for the other and unless you’re putting this into a competition or making it for a veteran of the Israel Air Force you probably would never know the difference. Next is putting together the landing gear bay that attaches to the cockpit.

Following this the two fuselage pieces are put together with the cockpit/landing gear bay. Here you remove a few pieces from the mold but other than that this is a pretty straightforward step.

Next is putting the landing gear wells into the delta wing, and I had no issues of any kind. The important thing to remember here, and they do explain it, is to open the holes for the pylons. I accidentally opened a few too many so make sure you check step 22 or 23 to determine which holes you need to open. Next you attach the top of the delta wings and a few small pieces. They fit well; you may need some putty for certain pieces that have those “square peg into square hole” type fits. However it’s not terrible.

The next step is attaching the delta wing onto the fuselage and putting the intake “insides” onto the fuselage. I actually put those on later because I made them white and was afraid to hit them with some paint by accident. After this you place on the air intakes and canards, I kept those off right before I was finished construction so that I could get everything painted properly. Again, just a suggestion.

There were a bunch of fuselage parts to install in the next step: small intakes, pitot tubes, and a “cap” that fills the gap between the delta wing and the fuselage. The next step is attaching the main landing gear doors and small pieces on the underside. Nothing too extravagant, however like most of my landing gear I waited until the very end before I put the pieces on.

Next is doing the main landing gear. I wait until the end to place them but I put them together and left them off to the side. There is a very nice front view of the plane that shows how the pieces should look when the plane is sitting on the ground. It’s very helpful for alignment purposes. Following this is the nose landing gear, you have some options here for the C7 and a bunch of little smaller pieces that will be placed.

When attached the nose, pay attention as doing the C2 or the C7 will make a difference here. I had a partially melted nose piece in my kit and AMK was extremely helpful in sending me a new nose piece so I could continue with my review. I wanted to personally thank AMK and Dave for arranging all that and getting me a new piece. However, the nose piece was the only piece that gave me a little trouble. It was a little smaller than the connecting fuselage so there is a little lip at the nose cone.

Next is the nozzle and I liked the detail. There wasn’t too little to make it insignificant, but there wasn’t too much that it would make you think you were wasting your time on a piece that would never be seen again when it was all said and done. Then the nozzle slips into the fuselage and fits very nicely.

The next step puts together the canopy and ejection seat. There is a significant difference between C2 and C7 so make sure you know which one you pick. Much like the panel from the cockpit, unless you’re specifically looking for that detail and need it to be precise you could really do either and I’m sure no one would know the difference (unless you’re in a competition!)

Next is a nice description of the pylons, missile launches, bomb racks, the laser guided bombs, and fuel tanks. The nice part about these two steps is that there is a very nice color depiction of the bombs and missiles and how they need to be painted. Again as stated before make sure you know which type (C2 or C7) needs which bombs or missiles. The next two steps provide the detailed location of each bomb/missile for the different models.

I had a few issues with the decals, not with them sitting or finishing, although they are a little thick. But the instructions sometimes call out for decals that do not exist or are not there. I think there may be a few misprints on the exact numbers because by the pictures you can tell where they are. They also have an all white depiction of the Kfir so you can see where the decals go to make it easier to understand.

Overall I really enjoyed this kit, which went together really well and I would highly recommend it to anyone. I didn’t see too many flaws in this kit. The decals were a little thick but the fit of the kit parts were pretty nice. I like a challenge so I made the C7 with all the camo colors. I used play dough for the first time to use as the barrier to my camo and overall I think it came out well. This was my first AMK kit and I was pleasantly surprised at how good it looked and went together. I’m now looking forward as well to doing the multiple other kits that I have from AMK.

Thanks to IPMS/USA and AMK for providing this copy and the opportunity to take a look at their model of this nicely designed kit.