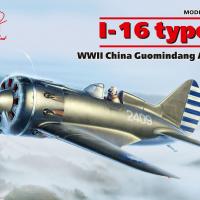 This Polikarpov fighter, developed in 1934, took a lot of its design ideas from the then-revolutionary Gee-Bee racing airplane of the same period – that is, the largest engine that could be fit into the smallest airframe. Adding retractable landing gear and four rifle-caliber machine guns and you had the miniscule I-16, a staple of the Soviet air force through the early part of World War 2, almost 10,000 being manufactured.

These tough little aircraft served in other forces as well, most notably in the Chinese Guomindang, where they pitted themselves against the more nimble and far more numerous Japanese fighters of the period. How they fared is another story.

ICM continue to broaden its I-16 stable by offering the Type 10 in Chinese markings. This is the version I was offered for review, and having made the Azur version of this little vehicle many moons ago, I was more than a little eager to see how things had improved since then. I am happy to report that the ICM kit is a really nice little jewel, with excellent surface detail, attention to variant parts and a smooth and forgiving assembly. All in all, this kit gave me less trouble than almost any kit I can remember tackling.

ICM offers a number of parts that create the Type 10 version, leaving quite a few large pieces behind, including half a fuselage, the lower wing, cowling and propeller. A separate sprue contains all the new variant parts, and I was quite pleased with the quality.

Construction begins, oddly enough, with the main wing. Be sure and use the correct variant part for the right wing aileron, as it’s easy to miss this part if you’ve just looking at the pictures. The cockpit follows, and again, the parts are a smooth fit. The control panel features a clear face with a decal that sits behind it. Normally, I prefer to hand-paint the dials, but in this case I wanted to try this out, and was extremely pleased with the result. Although you have to meticulously paint the basic panel color around the dial faces, the result is very three-dimensional and convincing. No seat belts are supplied, so I made my own from flattened solder and wire. I did cut a slot at the top of the seat for the shoulder straps to insert from, although I have no idea if that’s accurate or not. It just looked correct to me.

The fuselage goes together neatly, and the only putty work I really had to invest in was around the elevator flanges. The wing attaches with no real gaps so that I had the majority of the body work completed in one sitting. The single-bank engine is very nicely done, with its support frame and rear equipment – enough so that I chose to leave it exposed – something I rarely do. A little extra detailing on the cylinder heads and cowl attachment points added the final touch to this area.

Actually, to be honest I can’t recall a single point during this build where I encountered an issue. Even the decals lay down with no fuss. Because of its size and simplicity, this is really the kind of model to build when you’ve been stressed out by some over-engineered problem child of a kit. In contrast, this was a thoroughly pleasant build.

The kit offers 4 finishes, although the Chinese air force of this period was not known for imaginative schemes – think of Henry Ford’s comments on Model T paint jobs. I chose what I considered one of the more colorful versions (a yellow spinner) and had some fun doing shading on the simple body scheme to lend it some texture and visual interest. I’m actually quite happy with the result. The only other modification I made to the kit was drilling out the wheel axles so fine thread could be inserted to represent the cabling for the gear-raising crank.

All-in-all, this is a real charmer of a kit – easy to build, nicely detailed without all the “whiz-bangs” that some kits throw in just to make things complicated. The final result is a beautiful rendition of this pugnacious little airplane. I think I’m in love.

My thanks to ICM for creating such a fun kit and to IPMS/USA for letting me get my grubby little fingers on it for review. Stay safe, everyone!