I-16 Rata, The Fighter That Saved the USSR 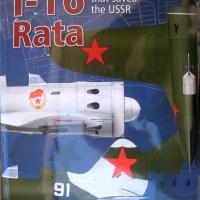 This book provides a very complete history of the development of the Polikarpov I-16 fighter series. It actually goes further than that, as it also explains the political and economic conditions in the Soviet Union after the 1917 Revolution, when the Tsarist Russian government was replaced by Trotsky’s Communist regime in the twenties and thirties. The author goes into extensive detail explaining how the Soviet economy was going through very severe changes, with violent repression of anyone who was even suspected of disagreeing with the system. Hundreds of thousands of innocent people were slaughtered during this process, and many more were imprisoned for extended periods, but some were still allowed to work on whatever projects they had been working on. This was the case with some of the aircraft designers, as while designers like Igor Sikorsky somehow managed to escape the USSR and wound up in the United States, where his work is well known, while others, including Polikarpov, were allowed to continue their design and development work under prison conditions.

The book continues describing conditions under which the aviation fraternity had to work to accomplish anything, along with progress in other countries. Early fighters and other types are described, along with earlier Polikarpov fighter designs, giving the reader a good picture of the origins of the I-16 fighter. Particular attention is given to the I-15 and I-153 biplane fighters from Polikarpov, as they were really the patterns from which the monoplane was developed. Once the I-16’s appeared in service in the early thirties, their military careers in Spain, China, and Mongolia are described, concluding with the massive numbers which were used against the Germans and their allies in the earlier stages of World War II. Some captured examples were used by Finland against the Soviets. Some survived the war, and a few of those in Spain survived until the early fifties.

Polikarpov designed later versions of the type, powered by liquid cooled and radial engines, but these lost out to fighters of Lagg, Mig, and Yak origins.

The book does not follow the usual format of chapter sequence, and does not have a table of contents or an index, which makes finding specific information a little difficult to locate. It is broken up into subdivisions, and these are somewhat useful. The text is easy to follow, although I noticed a few grammatical errors in the book, including problems in capitalization. Country names are not capitalized, which shows that the editorial staff was not experienced in English language writing. Perhaps an English or American proofreader would have helped.

But overall, this is a book packed with technical and historical information, and I was particularly impressed with the explanations of the Soviet political system and its effects on the economy and technology involved here. I believe they did a good job because there were probably quite a few on the staff that actually lived through the communist regimes, and their experiences were first hand. It had to have been a frustrating experience for anyone with engineering skill and experience working under the direction of people who rose to the top mainly because of their political positions.

One thing that was particularly impressive about this book was the extent of detail that the writers included to tell the story of not only the I-16, which was produced in numbers which rivaled other first line fighters with between 18,000 and 20,000 produced from the early thirties when it was the probably the world’s most advanced fighter, until 1943, when it was finally withdrawn from service in the USSR, and its competitors which eventually replaced it.

One area not covered in the book is available model kits. There is a lot of information in the book directed towards modelers, but absolutely no mention of kits available, which is a feature that is starting to appear in general histories of particular aircraft types. The old Revell and Matchbox kits are now probably obsolete, and the newer models in 1/72 scale by Hasegawa, A-Model, and ICM will probably result in a more accurate model in that scale. In 1/48 scale, Academy, Czechmasters, Hobby Craft, MPM, and a few others, are listed as available in the Burns Guide. ICM apparently does a 1/35 scale version. Kits are available if you can find them.

Overall, this is a very impressive piece of work. After reading the book straight through, you will have a very good idea of how this aircraft was developed and used, how it succeeded in spite of the political conditions under which it was produced, and how the opposition failed mainly because the plane was very successful in combat not only in the Soviet Union but also elsewhere. In fact, the book is not only aviation history but also covers a great deal of political and economic history as well. This is stuff that you don’t get in high school, or even in college, depending upon the instructors of course. Too bad you can’t get college credit for reading it.

This book is expensive, but it is well worth it. Check online, as the book is listed as available from several sources, and it will probably sell out quickly. Don’t miss out on this one. Highly recommended.

Thanks to Casemate Publishers, the distributor, Kagero Publications, the publishers, and IPMS for the review copy. I shall treasure it.