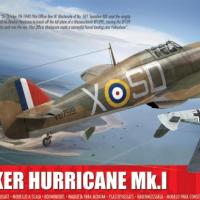 The Hurricane ranks with the most important aircraft designs in military aviation history. Developed by Sydney Camm, Hawker's Chief Designer in the late 1930s, the Hurricane was the first British monoplane fighter and the first British fighter to exceed 300 miles per hour in level flight. It was a single seat fighter with an enclosed cockpit. It featured a stressed skin aluminum wing with fabric covered aluminum control surfaces. The fuselage was a mix of steel tube, aircraft spruce forms, and fabric.

1700 Hurricanes fought in the Battle of Britain. That’s more than all other British fighters combined and those historic fights were seen as the Hurricane's finest hour. It fought over southern England and the English Channel during the summer of 1940 and fixed a place in history accounting for 60% of the RAF's air victories in the battle. After the Battle of Britain ended the Hurricanes were used across the world until the end of World War II.

My sample arrived in the standard red Airfix box featuring incredible box art of a hurricane victory over a Bf 109 achieved by taking out his opponent’s horizontal stabilizer with a wing tip. Inside I found 114 parts in grey plastic, 11 parts in clear plastic, instruction booklet and decals. The plastic has nice detailing and subtle surface textures including the fabric rear fuselage. I couldn’t detect any flaws worth mentioning. The kit features several options including full gun/ammo bays, positional flight controls, positional canopy and positional landing gear. Also, some parts are unique to the decal options choice including Rotol and de Havilland propeller assemblies. The instruction booklet is easy to understand and clearly printed in color. The decals include markings for two aircraft, they’re printed by Cartograf and look very nice.

Starting with the cockpit, I soon found myself admiring the genius of design. The tubular frame construction of the cockpit is assembled on the main wing spar and forward wing bulkhead. This assembly includes the cockpit floor that doubles for the undercarriage upper bulkhead. These parts fit great and look great. I then painted and finished the interior wings with the cockpit before closing up the fuselage halves (also finished). I decided not to add the gun option due to time restraints on full build reviews, however, the parts look very nice. Following up, I then added the lower engine cowling and rear bottom fuselage. Next went the radiator scoop, the tail section, and all flight control surfaces. After that came all the other smaller parts. The landing gear was built up and attached after painting. The rest of the build was uneventful.

I highly recommend this kit to anyone; it’s easily a 9 out of 10 on the Greg-O-Meter. I would like to thank Airfix, Hornby and IPMS for the opportunity to present this fine model kit.