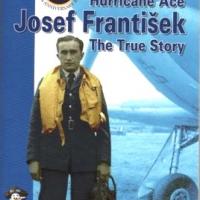 This is another fine book in the MMP Blue series. It covers the life of Battle of Britain ace Josef Frantisek from his birth in Czechoslovakia and his time in the Czech Air Force through his service in a Polish Squadron in the RAF up till his untimely death on a routine mission.

The book begins with what little is known of Frantisek’s early life and his induction into the Czech Air Force. This section also contains a number of good photographs of the various aircraft used by the Czech Air Force during his service until the surrender to German forces in March of 1939.

The next chapters covers his escape to Poland and eventual travel to France with other Czech and Polish pilots where he planned to continue the fight against the Nazis. He remained in the Polish Air Force which fought alongside the Armee d’e l’Air Four day after the French surrender, Frantisek and other Polish pilots had completed their escape to Britain.

The next sixty-two pages cover his distinguished service in the RAF, both the good and the bad. An entire chapter is devoted to his sometimes troubled relationship with his commanders. Frantisek had a tendency to fight independently, which garnered him the title “Lone Wolf” with the RAF. Still, he was an excellent pilot, and flew many missions during the Battle of Britain.

The book concludes with the story (or more accurately the mystery) of Frantisek’s death. On a routine patrol in which no enemy aircraft were encountered and were returning to base, suddenly his Hurricane broke away from formation and disappeared from sight. Later that day a crashed Hurricane with Frantisek’s body in it was found in southern London. The reasons for this crash were never determined. Frantisek ended his career with 17 confirmed kills, and 1 probable.

This book will be of interest to the modeler, aviation enthusiast/historian alike. I can recommend it to all who like the subject or have an interest in pilot biographies. It is a very interesting read! The book is available now through either Mushroom Model Publications themselves or their North American distributor, Casemate. Our thanks to them both for this review copy!