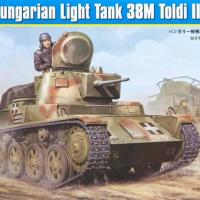 Had someone come to me even 5 years ago and said that in the near future, we modelers would be seeing kits of relatively obscure WW2 Hungarian tanks on the market from main stream injection manufacturers, I would have asked him what happy juice he’d been drinking. I would have demanded to be given a glass! We are, indeed, living in a Gold Age of modeling!

The 38M Toldi light tank was derived from the Swedish Stridsvagn L-60, produced in Hungary by the Hungarian Weiss Company under a licensing agreement from AB Lansverk. Three versions of the 38M Toldi were produced, with total production reaching 202 vehicles from 1939 to 1942. The tanks were first used by the Hungarian Army during fighting against Yugoslavian forces in 1941, and later saw action against Soviet forces during Operation Barbarossa. They were utilized mainly in reconnaissance, as the tank was no match in tank vs. tank battles against the likes of the Soviet T-34.

Hobby Boss produces two 38M Toldi kits, the Toldi I and the Toldi II, the latter being a slightly up-armored version of the former. The Toldi II kit consists of 15 injection molded plastic sprues for a total of over 450 individual parts, with 260+ of these being individual link tracks. Also included in the kit are a small fret of photo etched brass parts and a small decal sheet, plus a set of printed instructions and a color painting and markings guide.

The plastic parts are in two colors, a dark brown for the track links, and a light tan for the remainder of the parts. Detail on the parts is pretty decent, with little flash, but with a couple of sink marks that will need correction. What was present all over the kit were various seam lines in weird places, so spend some time examining the kit parts before you start construction so these seam lines can be removed using sanding sticks and sandpaper.

Construction starts with the road wheels and drive sprockets/idler wheels, and moves on to the lower hull parts. In Section 3, note that the two-part return rollers, parts B8/B7, each have a lip that needs removing using a sanding stick. Also, each of the return roller hubs, parts B5, has sink marks. I covered these with mud later, so they weren’t a bother. The torsion bar rocker arms that attach the road wheels to the hull do not have very positive alignment, so care must be taken at this stage to insure everything lines up correctly. They are also rather flimsy, so be careful.

Section 5 sees the attachment of the individual link tracks to the model, and it was here that things got very hairy. Each side of the tank requires 125 very small individual links. Each link is attached to its sprue at four separate points. The plastic does have some flex to it, but I found that unless I utilized a fine razor saw to cut the outside of the sprues, when I attempted to snip off the individual track links, they shattered. By cutting through the outer sprue sections, this relieved the pressure when I went to cut the individual track links. Even then, the builder needs to examine the track links and determine which of the four sprue attachment points to snip first, second, third, and fourth to minimize the pressure. Once you figure the sequence out, you still need to be extremely careful to avoid shattering the track parts. But there’s more: once you manage to get the parts off the sprues, and carefully clean up each attachment point, you run into a very unfortunate situation – the track links do not fit together as is. Each one, all 250, must be carefully trimmed so they can properly fit together. The parts being so small, this all becomes extremely tedious after a while, so I ended up working on 10 links per night for 25 straight nights!! In the end, I destroyed about 10 links, if memory serves me correctly, but thankfully Hobby Boss included a number of extra track links, so these losses didn’t end in total disaster!

Section 6 sees the construction of the rear hull plate and mufflers, the latter of which I left off until after painting the model so they could be painted and weathered separately. In Section 8, Hobby Boss’ instructions are in error. They show the hull side vents being installed upside down. A quick look at the instructions, and then a brief look at the box art painting of the tank, and this will become obvious. Section 11 sees the modeler performing origami with the photo etch light guards, but if one is very careful, they turn out okay.

Section 12 begins the construction of the kit’s turret. There are mold seams/flaws on the main upper turret unit, so carefully examine the part and use a standing stick and sandpaper to remove the problems. Also, make sure that the bottom of part A29 fits flush with the top of part A32, or there will be a gap later on. Parts D5, turret lifting hooks, are extremely fragile, being difficult to remove from their sprue and to clean up once removed. I also preplaced part D9, the turret machine gun, with an appropriately sized piece of metal tubing. The plastic part didn’t look like any gun barrel I have ever seen.

Due to the way the kit’s box was constructed, the decals hid in a place I couldn’t see. I therefore thought that they were missing, and so I searched around a found some replacements – Bison Decals set 35177. The small issue is that these are meant for the Toldi I, and thus have the earlier war green/red/white Hungarian crosses, whereas, technically speaking, a Toldi II should probably have the later black/white crosses. But it’s my model and I like COLOR! (I did eventually find the kit decals when I dismantled the box before recycling it!)

The model was painted in a three tone scheme: red/brown, green, and yellow, and I utilized Tamiya acrylic paints for these, being essentially the three color later-war German paints. The tracks were painted using Vallejo’s Track Color. I then applied Tamiya X-22 clear gloss to protect the paint and give the decals a smooth surface to adhere to, followed by more clear gloss once the decals had dried for a suitable period of time. Testor’s Dullcote was then applied, followed by a wash of dark brown oil paint/thinner, and some darker pin washes to help pick out the raised details. Once these had thoroughly dried, I airbrushed another thin layer of Dullcote to protect the washes, then applied various layers of AK Interactive streaking effects. Then another thin layer of Dullcote, followed by some chipping with a suitable Dark Gray Vallejo acrylic color. I know there is debate about the use of chipping, but I think it adds character to my models, and I like the look a great deal. Following this, various rust effects were applied, using an appropriate oil paint color. Then I applied various layers of road dust and mud, experimenting with the AK Interactive line of products mixed with plaster of Paris. Finally, a graphite pencil was run over various parts of the model to give it a metalic look, which again I find appealing to the eye.

Due to the tedious issues with the tracks, I would recommend this model only to experienced modelers willing to put in the extra work to turn this kit into a nice model. Other than the track issues, the model built into a very nice replica of this overlooked Hungarian World War Two tank. My sincere thanks to Squadron Models for allowing IPMS USA to review this kit, and IPMS for providing it to me for review.