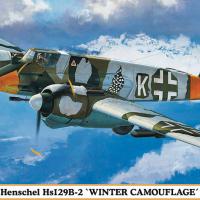 The Henschel Hs-129 was a purpose-built ground attack plane which was designed for destroying tanks and attacking enemy emplacements. It wielded several versions of a 30mm cannon and had an armored cockpit and engines to allow for close air support of troops.

Hasegawa has reissued its excellent Henschel Hs-129B-2 kit with the needed decals to make two winter camouflage schemes. The kit comes with nine gray sprues and a clear sprue and a new set of decals. There is also a small poly cap sprue which is used to hold the propellers onto the engine faces. The panel lines are great and the kit is flash free.

The first thing that you realize with this kit is how small the actual plane was – it had a wing span of 47 feet, which is only slightly larger than a P-47. Because I can do nothing simply, I decided the kit needed resin, since this was the second one I was building. I had a Verlinden set, two CMK sets, and a set of Moskit exhausts, and so the first thing I did was to figure out a plan of attack. I decided to open one of the side cannon bays, one fuel tank, and two of the fuselage panels, as well as adding a resin cockpit. Does the kit need these? – no, it is very well detailed on its own and has a great cockpit, but I couldn’t help myself. I also decided to replace the flaps and ailerons and both stabilizers…it’s an addiction.

I broke out UMM’s excellent razor saw and trimmed all the resin. I then removed the flaps from the wings and used a drill to open the radio hatch, the left cannon hatch, and an access hatch on the right side of the fuselage. All went pretty well. The resin cockpit fit like a glove. The resin parts were washed and then glued in place inside the fuselage. After a little thinning and a few trial fits, they went right into place. Kudos to CMK – the fit was good and the detail was great.

With the interior parts painted, I closed the fuselage. The wings and nacelles were added, as well as the noted parts, and I did do some filling on the top and bottom of the fuselage. Also at this time, I added the SAC metal gear from my previous review. The engines were built and painted and added to the nacelles and the cowlings built and added. The resin tails with their separate parts were glued in place, and I was almost ready for paint. The instruction sheet start-to-finish is only 9 steps, and fit is good, so it was fast.

The fuselage openings were masked and I sprayed yellow around the rear fuselage for the band. This was masked also with Tamiya tape. I do think that when you can paint these bands, they look better that the decals, no matter how good the decals look. My goal in painting was to depict a very dirty, whitewashed plane from 10.(Pz)/SG9 stationed in the Ukraine in March 1944 and flown by Lt. Walter Krause. The plane had a nice splinter camouflage underneath the whitewashed top. I started painting the kit with Xtracolor- RLM 65 on the bottom and underside of the wings and tail. I followed with an RLM 70/71 splinter scheme, again masked with Tamiya tape. I painted the wheel wells RLM 02 and set the entire kit aside to dry. While drying, I masked the canopy and windscreen and sprayed those. I then used a few masks to keep the decals areas clear and free-handed in the general whitewash scheme but did not go for complete and full coverage – to some extent, it was mottled onto the camo beneath and not uniform.

To prepare for weathering, I sealed the kit with two coats of GlossCote. At this time, I added the decals, which went on very well. I added them now so I could get some coverage in the next step. I used Andrea Miniatures white paint and a small, flat-tipped brush and put “paint brush” marks on the edges of the winter camouflage. I used this to tighten the edges and attempt a brushed-on appearance. I left the pattern a little random but tried to keep fairly sharp demarcation lines. I sealed again and, when dry, made a thin wash of brown oil paint in Turpenoid. This was washed over the plane for a dirty, grimy look. The underside was lightly sprayed with Vallejo dark earth to give a streaky appearance. Once dry, this was sealed with DullCote.

I added the exhaust stains and other streaks with pastels and sealed for a final time. The clear parts were added, along with the lights, open bay doors, and wheels. A couple rounds of touch-up and select DullCote and the kit was done. Don't forget the decal that goes inside the canopy!

This was a thoroughly enjoyable kit. Right from the box, it is a great break from complicated builds and yields a great replica. With a few added touches and paint, it can be a centerpiece of anyone's Luftwaffe collection. Go get one and don't wait! I also added a shot of both of my kits – maybe I should start a collection?

My thanks to Carol Pesch and Hobbico and IPMS/USA for the chance to review this great kit.