How to Kill a Panther Tank: Unpublished Scientific Reports from the Second World War 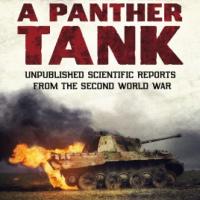 One of the few books that explores what British and Commonwealth forces knew about the dreaded Panther tank and how to destroy it using previously unpublished documentation. An excellent reference book for military modelers, historians and tank wargamers (War Thunder/World of Tanks) interested in the iconic Panther with authentic camouflage suggestions. Three chapters cover the design and development of the Panzer V Panther tank.

The first book to list all surviving Panther tanks, provide photographs, and give their current location

As soon as intelligence reports confirmed the existence of the Panther, the hunt was on to find reliable information on how to knockout the new German tank. It was widely believed that the only way to stop a Panther was to penetrate it with an armour-piercing (A.P.) round.

Luckily, the British 17-pdr anti-tank gun could do just that, but the British were also looking how to destroy them by using other weapons. They tested high-explosive artillery shells and 20-mm AAA cannon rounds to penetrate and damage the tank’s rear engine deck and puncture the vehicle’s radiators. Loss of water would cause the engine to overheat and seize.

Tank radiators were large, and spares were not carried on the tank. If the Panther could not be recovered back to a maintenance depot, the crew would abandon the tank and disable it with internal explosive charges.

Craig Moore has had an interest in military history since childhood. Eight of his close relatives fought in both world wars. Craig retired from London's Metropolitan Police after 30 Years of service. He lives in Southwest London but regularly travels around the world visiting tank museums.

Military vehicles have been a secondary modeling interest for me for a long time. The German Tiger and Panther tanks are center stage. I have many publications in my library regarding the Panther that address its development, combat history, and the terror and damage it inflicted on the Allies armies. The Panther appeared invincible. When the subject publication became available I was intrigued and volunteered to review it.

Here the author offers period background information for the publication's sources. The Russians were the first to capture a Panther giving them the opportunity to examine and test the vehicle. The findings report was shared with the Canadian, English and Americans. This initial information proved valuable to determine how to knock out a Panther.

In March 1944 the first captured Panther arrived in Britain. A report on the evaluations and findings was issued in May 1944. No live fire tests had been conducted at this point. The introduction goes on to offer a brief synopsis of the following chapters in this publication.

Design for a 30-ton tank to replace the Panzer III and IV began early in the war. After the invasion of Russia the Germans encountered the T-34 and were impressed and amazed to say the least. Technical experts were sent to the Eastern front to examine knocked out T-34s. Their findings and observations were incorporated into the design of the Panther.

Daimler-Benz and MAN both prepared preliminary designs. This chapter breaks down the design and construction differences between the two manufacturers. The German High Command wanted the new Panther in production by December of 1942 to provide large numbers of tanks for the Eastern Front spring offensive. The MAN Panther was selected over the Daimler-Benz design due to several problems with the later design. Although some of the Daimler-Benz features were incorporated into the final MAN production versions.

The first Panther production model was the Aust. D and not the Ausf. A. This chapter address the main gun, the armour, turret, engine, tracks, and several other features. Most sections include color photos from restored Panthers. The chapter is concluded with the vehicle specifications.

The photos should prove valuable to the armour scale modeler.

This chapter follows a similar format as for the Ausf. D.

Here again, this chapter follows a similar format as for the Ausf. D. The Ausf. G featured a redesigned hull, while retaining the turret and gun from the A version. There is also included a paragraph on the painting and camouflage used for the Ausf. G.

This chapter covers the "secret report from the Canadian military Attache' USSR" as provided by the Russians. The material included was transcribed from original wartime documents. This is a very detailed report on the features found on a Panther Ausf. D captured by the Russians. Each component of the vehicle is noted and described in detail.

The chapter concluded with a Russian pamphlet detailing the anti-tank weapons aiming points recommended to knock out a Panther.

Two pages of simple plans, profiles and endview line drawings that identify the thickness of the Panther's armour. These drawings were included in a 1943 poster distributed within the British and Commonwealth armies.

Here again the information included in this chapter has been transcribed from original wartime documents. This information represents a very detailed effort to identify the vulnerabilities of the Tiger and Panther tanks. It is evident that a great deal of study and analysis went into the original document.

This chapter covers the rather crudely prepared pamphlet for the US Military. Pages from the pamphlet are photographically reproduced that show where the Panther is vulnerable to anti-tank hits. It also cautions not to engage the Panther head-on.

This chapter is also transcribed from original wartime documents and represents test and observations on a Panther captured by the Russians and turned over to the British. The vehicle had suffered from some battle damage as well as mechanical breakdowns, and therefore many tests were inconclusive, but the Panther was seen as a dangerous opponent. Breakdowns included transmission third gear failures, poor engine performance and operation, as well as the occasional engine fires. This chapter does offer some interesting reading.

Here again the information included in this chapter has been transcribed from original wartime documents. The studies include comparisons between German and British armor design and quality. Lots of technical information including schedules, sketches, and period black and white photos of Panthers.

Here again the information included in this short chapter has been transcribed from original wartime documents. Rate of fire, elevating gear, and several other topics relating to the Panther's fighting capability are noted here. The information contained herein is based on an incomplete vehicle that is battle damaged.

The information included in this lengthy chapter has also been transcribed from original wartime documents. Three model G Panthers were used in these tests. Several tests were conducted ranging from small arms to air attack weapons to 25-pdr HE weapons. Diagrams, charts, and period black-and-white photos showing impact damage are included.

There are two black-and-white period images and text showing some authorized field modifications made by maintenance crews to protect some of the Panther's weak points.

Enter the rocket-firing Hawker Typhoon. These attacks were greatly feared by the German tank crews. The lack of accuracy of this attack method is discussed. The number of hits was quite poor, but those that did hit were devastating. Rocket attacks were often more demoralizing for the crews than destructive to the vehicles.

This chapter covers British anti-tank weapons ranging from tracked vehicles to hand-held weapons, including mines and hand grenades. Several color images of the various weapons are included along with explanatory text.

The information included in this chapter has again been transcribed from original wartime documents dated from July 1943. Included are several field reports from British gun crews on their experiences engaging Panther and Tigers. Often the Panther crews appear to have been confused or inexperienced when fired upon, making for relatively easy kills for the British gunners.

This is a technical section addressing armour types and designations, as well as damage caused by AP shot. Several line drawings and black-and-white period photos showing shot impact and damage are included.

Many photo references for the Panther will often include a rear view of the tank, and a bucket, often dented and battered hanging off a bracket. What it was used for is spelled out on this page. The bucket had many uses from catching spilled engine fluids, to mixing camouflage paint to carrying water. The Swiss army knife of buckets!

Several color images of Panther tanks from European museums and restored vehicles are included in this chapter. The text offers information on the location and historical background for the various vehicles.

I found this publication to be a very interesting and informative read. I found the period technical material to be especially interesting. Based on the efforts made by the Allies to determine methods to counter the Panther and the Tiger it was obvious the German tanks were a very serious threat. Many of the detail images contained within the pages will be useful to the scale modeler, but overall I would recommend this publication to anyone that has an interest in World War II armor history. Highly recommended.

My thanks to Casemate Publications and IPMS/USA for the opportunity to review this book and to add to my reference library. Well worth having.