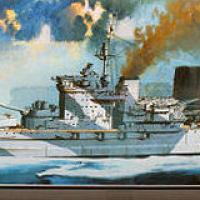 This model is not a complex build, but it does have some details that are extremely small. Be forewarned: good tweezers, sprue cutters, and an extra fine razor saw blade are mandatory to release some of the over 650 parts of miniscule carpet-monster food that exist on the trees. An exploded diagram with two hull sides, 7 parts runners, one display base, a decal sheet with flags and early aircraft markings, and a PE sheet with crane structure are provided. I opted to do the kit without extra PE or rigging to show what a buyer gets for his money. In this case, a lot!

Study the instructions first; as usual, since ships hold some pitfalls if you don’t. Small parts that fit in places which are hard to get to later are the norm. Paint the splinter camo as you go along; otherwise you won’t be able to do it upon completion of the build. In this build, the hull is constructed first.

In step 1 there are spreader bulkheads which must be placed correctly; I cemented the vertically-split hull parts together, taped them, then inserted the bulkheads without cement. Use tape to hold the top hull together; this prevents cement from melting the bulkhead attachment points, which could “pinch” the hull together. The prop shafts are added next, along with the fantail lower deck. The main deck is split into three parts, which all nest together quite well. After the cement dried here, I filled the forward expansion joint with Vallejo putty and let it dry.

I decided to paint the hull at this point; the kit is intended in this release to be painted in 1943 markings, so I opted for my interpretations of colors. Anti-fouling red (Krylon red primer), the flat black waterline boot, and then the upper light gray (I used Tamiya USAAF neutral gray) and dark gray (Testors Panzer gray) splinter pattern. The deck was then painted Tamiya wood tan, and then details were picked out using various gray paints. I left off the side hull gun turrets until toward the end of the build so I wouldn’t break them off.

Step 4 is where you begin to install hull mooring bollards and anchor chain spindles. Myriad other small details are also added at this point, including deck AA gun tubs, the guns and splinter shields, ammunition lockers, and the anchor chains. The chains are molded plastic and look very realistic. I recommend you clip the gun barrels free from the sprue first, then cement the splinter shields to them before removing the rest of the gun from the tree. It’s nigh impossible to install the splinter shields after the guns are installed.

Step 5-8 are devoted to the forward superstructure, main gun turrets, and bridge/combat bridge areas. Gun directors are also included, along with searchlights and other bits. The main gun blast bags are nicely molded; some may want to put a bit more angle into their mounting faces, but I went with the kit-provided angle. One nice feature is the turrets are attached like those on armor kits – there are tabs that engage when the turret is turned 90 degrees from fore/aft; this allows one to paint and detail without the turrets being in place. The barrels are hollow on the end; no brass required! Step 9 is where all previously noted items are cemented to the deck.

Step 10 is the central AA and boat deck assembly, with the integral hangars for the Walrus observation aircraft. The 8-gun “Pom-Pom” turrets go together well, and add convincing detail. The hangars could be shown open, as there is structural detail inside. The funnel is also added to this assembly, as are the boat cranes. Here you have a choice of photo etch cranes or plastic; the PE looks far better than the plain plastic versions when installed.

Step 11 is the aft superstructure assembly and the Walrus aircraft. There is opportunity for enterprising aftermarket companies at this juncture, as the wing struts and engine egg assembly are solid board-like structures. I know why they did it (most of us would break the uber-small struts required for a “scale” effect); these could be scratchbuilt, but might not otherwise hold the weight of the upper wing. Beaching wheels are also included; these, the engine, and four-bladed prop look very convincing. I painted the one Walrus on deck in the Dark Sea Gray/Slate Gray paint scheme, with mid-war roundels. The kit decals provide earlier markings, but I opted for mid-war.

Step 11 has you install the previous deck assembly on the mid and aft deck along with ladders. Step 13 adds all the various small boats which seemed to sprout like mushrooms on the upper mid deck; these are painted and attached per instructions. They add immeasurably to the overall visual “cool clutter” effect on the upper decks. Step 14 is the last, where the whole model is set on the stand with the nameplate. I painted the spindles gold, with a black stand and nameplate. Rub and Buff worked on the lettering.

All in all, a satisfying build of a ship that survived both WWI and WWII; one of the “Queen Elizabeth” class of warships, it was involved in Jutland and supported the invasion of Normandy. I know the PE folks are going nuts preparing sets for this kit, and the various paint schemes and upper superstructure fitment will make for interesting possibilities for both wars.

I enjoyed this build. Hearty thanks to Akiko Kimura at MRC-Academy for providing IPMS USA this magnificent model. Without the support of suppliers like you, we would not have a peek into what is being distributed to the public at large, and we appreciate the opportunity to review this model.