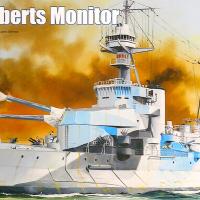 Heavily armed, shallow draft ships are known as monitors, named after the USS Monitor from the American Civil War. The USS Monitor carried two large guns in a rotating turret and had a flat hull with low freeboard. A later series of US ships that were designed for coast and harbor defense had a similar design and were generically called monitors. The term came to be applied to a ship that had main armament far beyond what would have been normal for a ship of its size and shallow draft to allow it to operate close inshore for bombardments. Monitors were used by the British during the First World War at Gallipoli and along the coast of occupied France and Belgium. A monitor was even used to shell the German light cruiser SMS Koenigsberg while she was laid up in the Rufiji River in Africa. No other ship type had a shallow enough draft or had heavy enough armament to deal with German cruiser.

The monitor HMS Roberts was the eponymous ship of its class. There were two ships in the Roberts class, Roberts and Abercrombie. As with all classes of ships, there were minor differences between them, but the essentials remained the same. The hull was wide and shallow to allow for inshore work while providing stability for the guns and additional mine and torpedo protection. The main armament of two 15-inch guns remained the same for both, Roberts using the recycled guns and turret from the World War One monitor Marshall Soult. The anti-aircraft arsenal differed slightly and was modified as the war progressed.

Roberts saw action in North Africa where she was damaged by bombs, Sicily, Salerno, on D-Day, and in the Walcheren Island battles. Abercrombie was damaged by a mine off Italy and was repaired, then sent to the Pacific, but the war ended before her arrival.

Upon opening the box, one is impressed with the 540 plus parts that are very nicely packaged. These parts include a two-piece hull (left and right), a one-piece deck, three PE sheets of parts, a length of brass anchor chain, and a small decal sheet with two White Ensigns. The instruction booklet is 16 pages long, and there is a full color painting guide.

Some of the parts were infinitesimal, measuring 2x3 mm, and some of the PE parts were not much thicker than a human hair. Great care is needed in just removing the injection parts from the sprue, as many of the attachment points are much, much thicker than the part. There was no flash to speak of, but there were mold seam lines to deal with on many parts, which can be tedious given the size of some of them.

The detail is excellent, however. The molding is crisp and sharp. However, what is molded on to some pieces as detail, is applied with PE on others. Even making allowances for molding limitations, it seems an exercise in making more parts.

Fit overall is very good. However, check every single piece before you try to cement it in place. The main deck houses all fit, but fit VERY tightly. A coat of paint will make them not settle down correctly, so you need to clean off the mating surfaces. Some locator holes are too small and will need to be reamed out.

Before you start, make sure you have two pairs of fine tweezers and an optivisor, cause you will need them all.

As this was for a review, I built the model out-of-the-box. I did modify the order of assembly as given in the instructions to allow for the application of the three-color camouflage scheme, covered in detail later. Speaking of the instructions, they are the typical Trumpeter fare with pictures of parts flying above the general vicinity with a vague arrow indicating the general location of where they go. In addition, there are a bunch of sub-assemblies in steps four, five, six, and seven that include lots of those tiny PE parts. These sub-assemblies are not numbered, so later in the instructions when they are to be added to the model, you need to guess which is which. You can generally do so from the drawings, but it took some referring back to the earlier step to make sure.

I ran into a problem in step three. The hull strakes are molded separately and have a sort of concave triangle cross-section with an overall curve to the parts. Unfortunately, the sprue attachment point is on the inside, concave surface. That means you have to remove the remaining attachment nub from a concave surface that curves in two directions. As these pieces are only about 3 mm wide, great care must be taken. I was not careful enough and ruined the parts, so my Roberts will have to roll a bit in a swell.

Almost all the deck detail is molded separately, which makes painting the deck easier, but you will need to paint all those parts separately. One point I can caution you about here is that some of the lockers/bins that are all over the deck are mounted right up against the deck houses. The tolerance is tight enough that if you glue the bins in place before you add the houses, the houses will not fit between the bins. Thus, I'd suggest that when you have parts that fit up against the deckhouses, that you put the houses in place temporarily and see if the parts fit. If not, remove the locators from the parts so you can attach them so that everything will fit.

When you come to constructing the masts, go very slowly. Some of the radar equipment on the top of the masts is extremely thin, and you also need to make the legs of all the tripods come together appropriately at the top, yet fit into their deck locations. This is especially true for the main mast and its observation deck. Careful as I was, I still did not get the bracing on the underside to mate up with the rear legs of the mast. This an uncorrectable mistake that I will have to live with.

The PE railings are all etched in the correct lengths for their locations and have the bends marked on the part. After dealing with generic PE railings in 1/700 scale, these were a treat and went on pretty easily. The trickiest PE parts are the assorted staircases and the bow crane. They look great when done, but your optivisor will get a work out as they are quite delicate.

The final construction step is the stand. The model does not really lock onto it in any way, so you have to glue it down, and the nameplate does not mate with the stand at all.

With major construction finished, it’s time for that three-color camo scheme. The colors called out for are Gunze water based paints, so you'll need a conversion chart. Mine consisted of holding paint samples up against the full color painting guide until I got some matches. I can't go into what to paint first, what to paint second, etc., as many parts are painted in place, some as sub-assemblies, and some independently. Suffice it to say, I glued as much in place as I could to minimize individual painting, then started with the deck because it would be easier to mask when the other colors were applied. Next came the light grey and then the blue. There's a lot of masking, masking removal, and subsequent remasking that gets a bit tedious, but the end result looks pretty good.

Trumpeter gets high marks for giving us something other than another Bismarck or Iowa-class battleship. This is an $80 model, but for that price you get a lot of nicely molded parts that build up into an impressive kit right out of the box. If you were to add rigging it would look very impressive indeed. It's not a weekend project, that's for sure, but if you're looking for something to sink your teeth into, Trumpeter's HMS Roberts will fill the bill.

My thanks to Stevens International for providing this kit and to IPMS/USA for allowing me to review it.

Finished Model - Bofors Gun Closeup - One of Eight, Each Made of Two Injection Parts and Four PE Parts