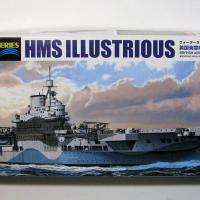 The Illustrious class was a class of aircraft carrier of the Royal Navy that included some of the most important British warships in World War II. The 1st ship in this class was HM Illustrious. She was laid down on 27th April 1937, launched on 5th April 1939 and commissioned on 25th May 1940. The Illustrious class relied on their anti-aircraft armament and the passive defense provided by an armored flight deck for survival.

In the Illustrious class, armor was carried at the flight deck level and formed an armored box-like hangar that was an integral part of the ship's structure. This armor scheme was designed to withstand 1,000-pound bombs. The flight deck had an armored thickness of 3 inches.

Upon opening the box you will find 13 sprues of grey plastic, 2 metal ballast, a decal sheet and an 8-page instruction fold out. The plastic is crisply molded and pretty much free of flash and sink marks. The reason for the high parts count is that there are many parts which are not used for this kit. The decals are printed cleanly, but their accuracy leaves a bit to be desired.

13 steps are needed to build this kit. Step 1 is the two-piece hull with steps 2-8 the construction of the island, which is the most labor-intensive part of this build (approximately 56 parts are used for this). After attaching the flight deck to the hull in step 9 the rest of the construction is adding in all the guns, small boats, rafts, antenna, searchlights and other small parts to the hull. There were no fit problems with this kit and it is a rather easy build.

You are given 4 Swordfish (2 with folded wings, 2 with wings extended). 1 each of the Hurricane, Spitfire Corsair & Barracuda. 2 Fulmars (one with folded wings). You also get a sprue of aircraft from Ashima’s USS Wasp kit containing 4 Wildcats and 2 each of the Dauntless & Devastator. There is some assembly required for the aircraft as you will need to attach the landing and they are VERY small so be careful. You also get 2 torpedoes for the Swordfish which is pretty cool but too small for me (I had a hard enough time with the landing gear!).

I used Humbrol enamels for the ship and a mix of Humbrol and Model Master for the aircraft. The decals went on easy and settled down with help from a little Solvaset but as far as accuracy goes….they aren’t. The upper surface roundels look more like WW I roundels. Luckily Starfighter Decals does sets of 1/700 FAA decals, so you’re covered there.

Aoshima has done a very nice job with this kit. Just a few challenging parts to the build but all in all an easy build.

Side views
Previous Next