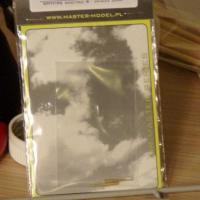 I admit to being a little confused when I requested this assignment; I was expecting something else. Still, these are very welcome components as I have two 1/72 scale Spitfire Mark Vs in my “to-build” pile.

The Spitfire was among the earliest production fighter aircraft to adopt 20mm cannon as armament, and the “B” arrangement for the cannon was introduced in the Mark I and Mark II models that fought the Battle of Britain. While the success of the armament was spotty at that time, it became standard on the Mark VB...and the same guns were also used on the initial production Seafire. The earliest Mark VC Spitfires also used this pattern of gun barrels before going to the “beefier” barrels as standard (parts that Master also offers separately). So these parts are compatible with more then the Spitfire VB.

The brass parts are sturdy and very well cast. In fact, the fine detail on the parts was too sharp for my digital camera to readily pick up on, so my apologies for the inadequate visual evidence. The cannon barrel even has a depression at the muzzle hole so it can be blacked in for the illusion of hollowness.

I made a trial installation on the port wing of my Smer (ex-Heller) Spitfire VC; my other Spitfire is an Italeri VB, which, while a closer match, also meant more work to remove the existant molded-on cannon barrel and drill a hole to receive the Master parts. Whereas the Smer kit's cannon parts were already separate pieces, and all I had to do was clean out the mounting hole to make the Master barrel fit.

The Master cannon barrel parts are a simple and effective way to improve a “legacy” model kit. They look right, and are quite impressive when installed. Highly Recommended. Thanks to Master Models for my sample.